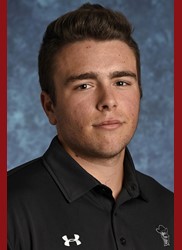 Appeared in 6 games with 8 at bats.

Appeared in 20 games and made 13 starts as a Freshman…Finished the year with a .250 batting average and 10 RBI…Went 3-for-5 with two doubles and three runs in his second college start on February 19 vs Bryant during opening weekend…Finished 2-for-4 with a walk and a run in a May 2 road win at New Mexico.

Starred at Campo Verde HS in Arizona…batted .500 as a Senior with five home runs…Broke the single-season school record for doubles (17)…Went 6-3 with a 2.58 ERA on the mound…First Team All-Division 1 and First Team All-District.