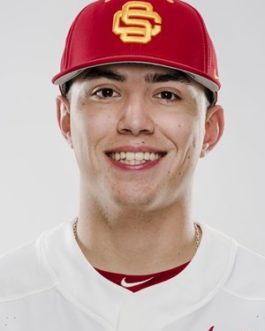 Appeared in 44 games, making 18 starts for the Trojans in 2017 … Moya had 12 hits and nine runs scored in his rookie season … Moya had a season high of two hits and two RBI against Holy Cross on 3/10 … Had three total multi-hit games during the season.

Parents are Luis & Valerie…Has one brother, Louie and one sister, Sophia…His aunt and uncle attended USC…Lists his most thrilling sports moment as when he won a gold medal while representing his country at the Pan American Games…After baseball he would like to run a training facility to help young athletes reach their goals and pursue a career in sports broadcasting…Lists his biggest sports hero as Mike Trout, because he is the perfect example of how the game should the played…Lists his favorite TV show as The Walking Dead…Favorite movie is Interstellar…Favorite musicians include Drake, Future, Chance the Rapper and The Weeknd…Birthdate is June 2, 1998.