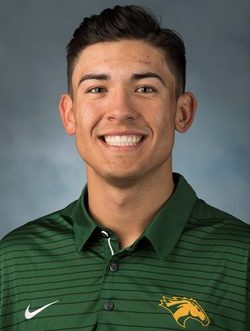 Made 26 appearances on the mound, second on the team. One start against Sacramento State, a no-decision… Compiled 1-2 record and 4.50 ERA as a true freshman. Accumulated 30 strikeouts over 44 innings pitched… Lone win was against Hawai’i on April 12 as he allowed three runs and 10 hits over 4 2/3 innings with season-high three strikeouts… Played summer ball for Eau Claire Express in Northwoods League, posting 3-2 record and 4.32 ERA with 35 strikeouts in 41 2/3 innings.

As a senior under head coach Mike Alonso at Upland High School, Gomez posted a 5-4 record on the mound with a 2.23 ERA, striking out 42 batters in 50 1/3 innings… Three-year varsity letter winner… Earned second-team All-Baseline League honors as a junior and senior… Collected seven wins and posted a 2.30 ERA in junior season… Participated in the 2013 Area Code Games and Gomez has played summer ball for the San Gabriel Valley Arsenal and Conejo Oaks… with the Oaks in 2014, was 3-3 with a 4.99 ERA on the mound, striking out 35 batters in 39 2/3 innings.