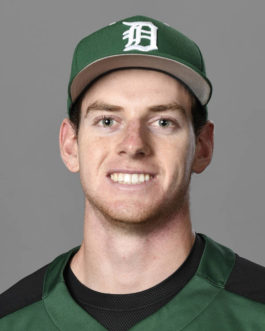 High School
Three-year letterman at Torrey Pines High School for his father who coached the baseball team … helped team to a 23-10 record and a Palomar League championship as a sophomore … during senior season, played a role in the Falcons winning the Classic Division of the Lions Tournament, one of the largest, oldest and most presitigious high school tournaments in the country … All-California Interscholastic Federation (CIF) Second Team and all-league second team at catcher … all-academic team.

Personal
Son of Kirk and Dana McCaskill has two brothers … born Oct. 29, 1998 in La Jolla, California … father pitched at the University of Vermont before embarking on a 12-year Major League Baseball career with the California Angels and Chicago White Sox, posting a record of 106-108 and an ERA of 4.12 … has thoughts of a business career after graduating … enjoys surfing and playing guitar.