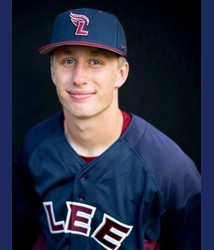 Played in 46 games…batted .287 in 136 ABs, with a .398 OBP and .368 SLG…hit 2 HR…drove in 16 RBI…had 21 BB to 31 strikeouts…stole 2 bases…hit 2 HR, and had 4 RBI, against Florida Southern on February 17…led Lee University to Gulf South Conference Championship runner-up…lost in Championship game to Mississippi College on May 9…

Played in 24 games…batted .185 in 54 ABs, with .297 OBP and .222 SLG…drove in 4 RBI… had 6 BB to 18 strikeouts…stole 4 bases…made collegiate debut in a game versus Albany State on February 9, going 1-for-2 with a run scored…also played during summer for Glens Falls Dragons in the Perfect Game Collegiate Baseball League.

Dalton is the son of Karl and Sandra Ney… He majors in Public Relations…. “Dalton has all the tools to be a great college player. He has good bat speed and power at the plate, has really improved his route running in the outfield, and has good arm. As he gets more consistent, he has a chance to be a really dynamic player” — Coach Brew of Lee University Flames.