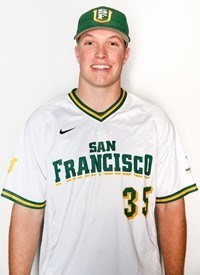 Made 22 appearances exclusively out of the bullpen… boasted the team’s best strand rate of 87 percent after allowing just two out of 15 inherited runners to score all year… stranded the last nine runners he inherited… went 0-3 with a 5.04 ERA… registered 22 strikeouts in 30 1/3 innings… worked a season-high 3 1/3 scoreless innings at Grand Canyon on Mar. 12, allowing three hits with a strikeout and a walk… fanned a season-best five batters over three shutout innings of work against Portland on Apr. 14, picking up his lone save of the year.

Played with the Wisconsin Woodchucks in the Northwoods League… was a teammate of Scott Parker… logged 16 innings of work over nine appearances… started three games… went 0-3… registered 10 strikeouts.

Made 15 appearances overall with one start… went 0-2 with a 7.24 ERA on the year… struck out 12 batters in 13.2 innings… registered a season-high two strikeouts on four occasions: vs. Hawai’i (Feb. 28), at Pepperdine (Apr. 2), at Stanford (May 3) and at Nevada (May 10)… went a season-long two scoreless innings, allowing one hit out of the bullpen at Stanford (May 3)… took the loss in his first-career start vs. Grand Canyon (Mar. 8), allowing three runs on two hits while walking two in one-third of an inning… made his collegiate debut with 1.1 innings of work at UC Santa Barbara (Feb. 21), allowing one run on two hits… enjoyed scoreless outings in five of his last seven appearances of the year.

Born Nov. 15, 1995 in Pasadena, Calif…. parents are Bill and Paula Steele… majoring in business… was on the Honor Roll in high school… his cousin, Kort Peterson, plays baseball at UCLA… another cousin, Adam Shrader, played volleyball at UCLA as well as for Team USA… enjoys golfing, snowboarding, scuba diving, watching Netflix, and hanging with friends.