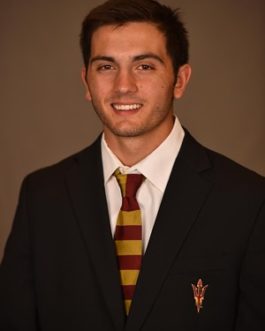 Made six appearances on the season. Had one pass for 40 yards against Washington State (10/22)

A three-year varsity starter at two different schools across two states. Led Mountain Pointe to an undefeated regular season and a 12-1 record as the team advanced to the state semifinals before the Pride lost to eventual state champion Centennial. Finished his prep career with 6,396 yards passing and 65 touchdowns to go along with 1,573 yards rushing and 18 touchdowns.

Completed 63 percent of his passes and finished with 2,005 yards passing and 15 touchdowns and added 932 yards rushing (8.2 yards per carry) with nine touchdowns en route to earning All-Arizona Division I Second Team honors from AZCentral sports as a senior Recorded 1,861 passing yards and 20 touchdowns in addition to 426 rushing yards and five touchdowns as a junior in 2014.