Preparation, Responsibility, Tradition and Family sums up the philosophy of Arroyo Seco Saints Baseball. Built on these four pillars, the Saints set out in 2004 to help graduating student-athletes prepare for the transition to college. Since then, the team has since grown into one of the West Coast’s premiere summer collegiate baseball organizations. 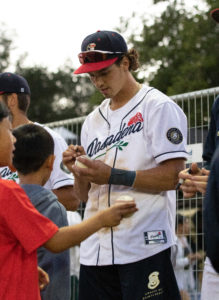 Based in the ‘Crown City’ of Pasadena, Calif., the home of the Saints is Brookside Park’s Jackie Robinson Memorial Field.

In the early and mid-1900’s, both the Chicago Cubs and Chicago White Sox each used Brookside Park during spring training.

In 1917, the chewing gum magnate and Cubs’ new owner, William Wrigley Jr., shifted his team’s preseason training camp from cities closer to Chicago to Southern California and Brookside Park, only a short walk from his mansion on Orange Grove Avenue. Two years later, Wrigley would buy Catalina Island and move the Cubs with the hopes of using his club as a cornerstone for a major tourist attraction. This transition opened the way for another professional team.

In 1933, the White Sox took up residence. Brookside Park is the locale where Marilyn Monroe conducted a famous photo shoot with White Sox players Gus Zernial, Joe Dobson and Hank Majeski. Legend has it this photo spread is where the Hollywood starlet first caught the eye of Yankee Clipper Joltin‘ Joe DiMaggio.

Today, the historic cobblestone stadium sits quaintly just south of the world-famous Rose Bowl in the heart of the San Gabriel Valley’s picturesque Arroyo Seco (the inspiration for the program’s moniker). The setting has a beauty and charm unmatched in Southern California.

In 1998, the City of Pasadena dedicated the playing field in honor of the Jackie Robinson—the Hall of Famer, Los Angeles Dodger and civil rights trailblazer that broke the color barrier in 1947 engineering integration of American professional sports. Robinson was a multi-sport standout for Muir Tech (now John Muir High School) and Pasadena Junior College (now Pasadena City College) before attending UCLA and then reaching the Big Leagues.

As the Saints looked to write its own piece of history, the program got off to an impressive start in its first 14 seasons with both team and individual records and accomplishments. From 2012­-14, the Saints made back-to-back-to-back appearances in the Palomino World Series facing top competition from around the United States and international teams.

In 2017, the California Collegiate League (CCL) extended an invitation to Arroyo Seco to join its prestigious 14-team, statewide league. In its first season in the CCL, the Saints would go on to finish second in the competitive South Division.

Major League Baseball franchises have drafted more than 25 Saints players. In 2015 alone, seven alumni were selected by professional organizations during the three-day MLB First-Year Player Draft. Four alumni were chosen in the 2016 draft.

The Saints extend a deep sense of gratitude and appreciation to all that have walked alongside the program for 18 seasons. With this support, hundreds of players that proudly call themselves Saints alumni have continued to play our great game at a high-level. 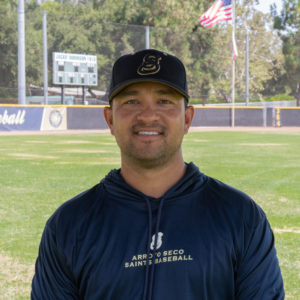