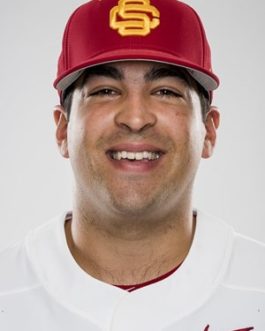 In his freshman season for the Trojans made 14 appearances … Appeared at bat nine times … Batted .222 for the season … Went 2-for-9 and scored two runs … Earned one RBI in his first game on February 13 versus Towson … Had an on-base percentage of .222 and a slugging percentage of .222.

Has two sisters, Lauren and Ashley … Lists Derek Jeter as his biggest sports hero because of “his hard work and integrity” … Favorite food is enchiladas … Favorite movies are The Town and Lords of Dogtown … Would like to visit Italy and Mexico … Listens to Led Zeppelin and Rebelution … Hopes to own his own business one day … Birthdate is May 30, 1996.