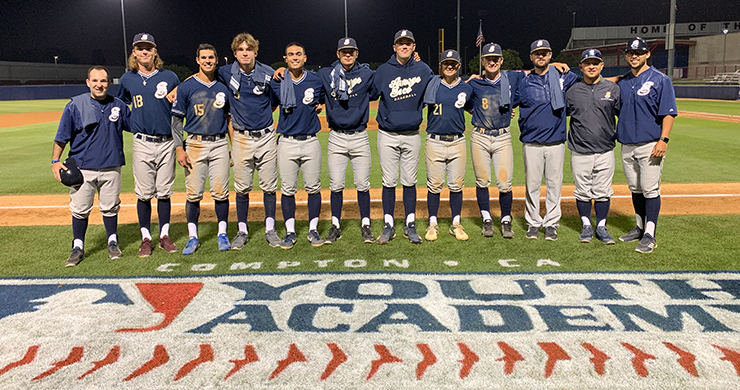 The Saints joined players from the Santa Barbara Foresters and the MLB Academy Barons to make up the Nationals team. The Americans consisted of players from the San Luis Obispo Blues, Conejo Oaks, Orange County Riptide, and the Healdsburg Prune Packers.

The Nationals jumped on the board early and maintained their lead throughout the game, resulting in a 5-1 victory.

Saints players made their impact on the field starting in the first inning. With runners on second and third with no outs, designated hitter Andy Garriola (Old Dominion) hit a sacrifice fly to left field to bring in the Nationals’ second run of the inning.

In the second inning, right fielder Evan Russell (Tennessee) walked and was eventually brought in to score the third run.

“It was fun to play against some of the best talent in the league,” Russell said.

Right-hander Cade Bullinger made his way to the mound for a quick third inning, facing three batters and striking out one.

“I had a lot of fun coming out here and pitching,” Bullinger said. “The main thing was going out there and throwing strikes, I think that is what led to a good outing for me. The quality of at-bats that our guys were able to string together really helped out our entire team…”

In the bottom of the third, Garriola knocked a double into the left field gap. He later stole third but was able to score on a throwing error to give the Nationals a 4-0 lead.

The Saints continued to contribute to the Nationals’ effort in the fourth inning. Russell hammered a single into left field and made his way to third after a line drive double. The bases were loaded when the Americans walked a batter bringing in Russell.

With one out, shortstop Drew Cowley (Pomona) made an impressive catch to get the second out of the inning.

The Americans managed to add their first and only run in the sixth inning.

In the ninth inning, right-hander Michael Garza took over on the mound, pitching one inning while only facing three batters.

The Nationals managed to keep the Americans off the board for the remainder of the game, resulting in a 5-1 advantage.

“Offensively, we did really good, our guys were hitting the ball all night. I think Bullinger really set the tempo for us as a pitching staff,” head coach Aaron Milam said. “Thomas Luevano (San Diego) got to play all game, Garriola got a big hit, Cowley made a big play. They did what they do for us on the field during the regular season, that’s why they deserve to be in the game.”

The Saints will host the Santa Barbara Foresters on Thursday at Jackie Robinson Field at 6:05 p.m.