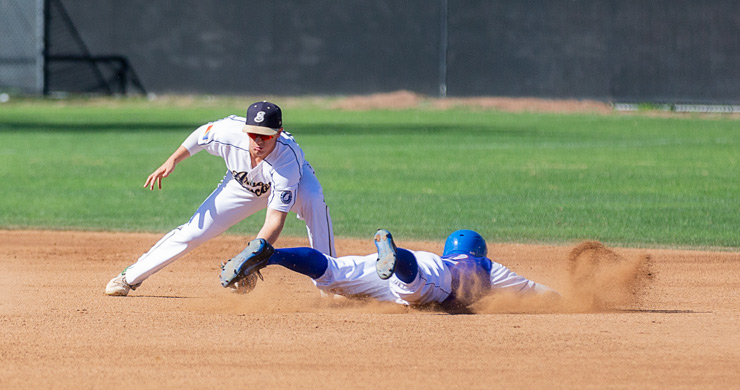 Hayden Harris (Georgia Southern) got the start for the Saints as he pitched four innings allowing two runs on three hits and striking out three. Harris has come out of the bullpen for majority of the college season, but head coach Aaron Milam decided to give him the nod.

“The starting role is new for him and we have seen him struggle in the first. He didn’t really struggle this game, but he walked one guy and hit another and without that, the game starts a little bit differently,” Milam said.

In the top of the first Harris struck out the first batter but the very next two batters reached via a walk and hit by pitch. After a double steal, the Riptide got on the board as the next batter hit a single to right scoring two runs.

After a scoreless second and third, Thomas Luevano (San Diego) opened up the scoring for the Saints as he hit a shot to right center that cleared the wall to cut the deficit to one.

“He’s a good player and that’s what he does. He has a really nice swing and is on the plane, which is why you see him hit home runs on both sides of the field,” Milam said. “A guy like that doesn’t come out of the lineup.”

The Riptide answered right back as they scored a run in the top of the fifth on Saints reliever Alex Cornwell (USC). Cornwell pitched two innings out of the pen and only allowed one run on just one hit while striking out one.

Down 3-1, the Saints tied the game in the bottom of the sixth as Andy Garriola (Old Dominion) and Thomas McCarthy (San Francisco) each drove in a run. With Luevano on second, Garriola hit a single up the middle to cut the deficit to one. Nickolas Pagan (Hartford) hit a single right after moving Garriola to third. With runners on first and third and only one out, McCarthy hit a sacrifice fly to center scoring Pagan.

In the top of the seventh, the Riptide regained the lead as a double scored a run. The Saints fought right back as Christian Scott (Tennessee) reached on a single. Anthony Forte (Richmond) hit a single right after putting Scott at second. Scott stole third putting runners at the corners with no outs. After a ground out by the Saints, Scott was able to score the tying run putting the game at four apiece.

The game headed to extras as neither team was able to score the winning run. The Riptide broke the game open as they scored six runs in the top of the 10th. The Saints managed to get a run in the bottom half, but the deficit was too much.

Luevano went 3-for-5 with a single and a double to go with his home run, just a triple shy for the cycle. Forte also finished the game going 2-for-4 with two singles and a walk.

The Saints went 5-1 in the six games played this week. They now have an overall record of 12-9 and are currently tied for second in the California Collegiate League standings with the Riptide.

The Saints head to San Luis Obispo on Wednesday night to take on the Blues. First pitch is set for 6 p.m.