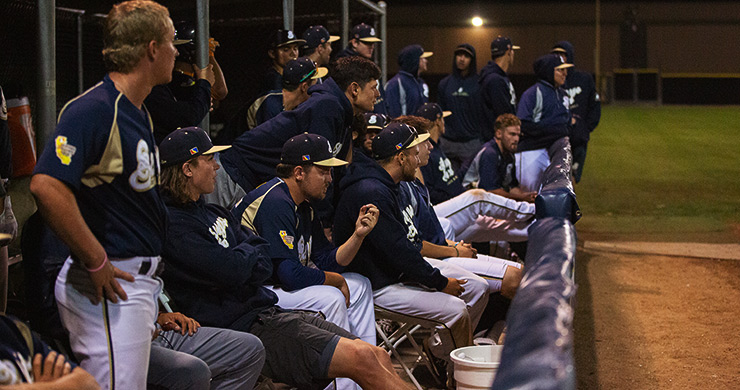 PASADENA, CA – Despite a four-run ninth inning by the Arroyo Seco Saints, their rally fell short as they were defeated by the Academy Barons 7-6 on Wednesday night at Jackie Robinson Memorial Field.

The Barons scored three runs in the first inning on Saints starting pitcher Drew Atherton (Cal Poly Pomona). The first two batters of the game hit a single and a double off Atherton to start the game. The following batter hit a grounder to first scoring a run for the Barons. After an error by the Saints, another double scored a Barons run. Atherton struck out the final batter of the inning but allowed three runs.

“The first inning was a struggle, they are a really good fastball hitting team and they were able to jump on my mistakes, but after that, I was able to get them off balance in the last few innings of my outing,” Atherton said.

In the bottom of the fourth, the Saints started to chip away as Thomas Luevano (USD) reached base on a hit by pitch and stole second. With a runner in scoring position Nikolas Pagan (Hartford) hit a chopper up the middle scoring Luevano from second.

Looking to get more runs the Saints in the bottom of the fifth had a runner on first and third with two outs. With Anthony Forte (Richmond) at third and Christian Scott (Tennessee) at first, the Saints had called a double steal allowing Forte to score, as the ball was thrown to second cutting the deficit to just one.

With only a 3-2 lead the Barons added two more runs in the top half of the sixth on Saints reliever Trevor Beer ( UC Santa Barbara). With the Bases loaded and no outs, the Barons hit a two-run single to push their lead 5-2. Beer got out of the inning with no further damage as he got the next three batters outs two via strikeout.

As we headed to the ninth the Barons added two more insurance runs to extend their lead 7-2.

Looking for a spark, Drew Cowley (Cal Poly Pomona) pinched hit to start the bottom of the ninth inning. Cowley reached base as he hit a shot to short which the shortstop was unable to come up with.  The following batter Nolan Tressler (Georgia Southern) hit a triple to left field scoring Cowley from first. Tressler scored on a balk by the Barons pitcher to cut the deficit to just three.

Down three and looking to get on base as catcher Matt Thomas (Harvard) hit a towering fly ball that went over the right fielder to give him a double. The Barons pitcher struck out the next two Saints batters. Still down three Scott hit a single up the middle scoring Thomas from third. Stapp was walked right after putting a runner on first and second with two outs. After a double steal, Scott scored on a wild pitch and also moved Wyatt Stapp (Cincinnati) to third as the tying run. Luevano looking to get a pitched he could hit struck out on an inside fastball cutting the Saints comeback short.

“We were pretty resilient in the bottom of the ninth and they got a guy with a little bit of velocity and the switched turned on a little bit for us,” said Head Coach Aaron Milam.

Tressler finished the game 2-for-4 with a single and a triple with one run batted in. Thomas went 1-for-2 with two walks and one run scored. Thomas also had a great game behind home plate as he caught three Barons baserunners stealing.

The Saints will now look to rebound as they will host the Orange Country Riptide on Thursday night. First pitch is set at 6:05 p.m. at Jackie Robinson Memorial Field.