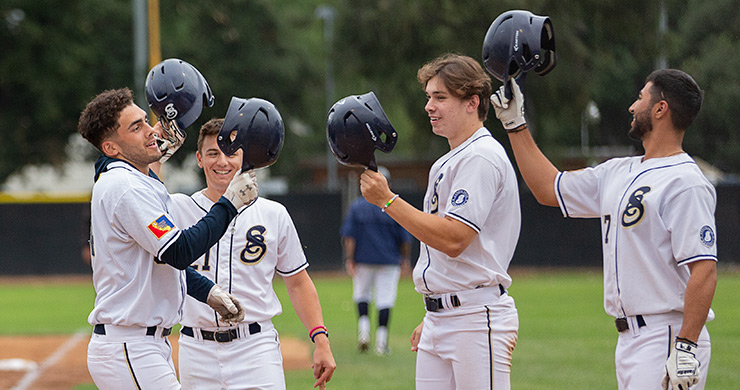 PASADENA, CA – The Arroyo Seco Saints offense exploded in the bottom of the eighth as they defeated the Conejo Oaks 11-5 on Friday night at Jackie Memorial Field.

“We have been a late inning team and we talked about winning the first inning,” said Saints Head Coach Aaron Milam. “I divide the game into thirds and if you win two of three you should win the game. We split with them in the first two-thirds of the game and so we needed to win that last third and the team responded well, and we did.”

In the bottom of the first, the Saints got the scoring started as Drew Cowley (Cal Poly Pomona) hit a single to left giving moving Nolan Tressler (Georgia Southern) to second who started with inning with a walk. With one out and two on Andy Garriola (Old Dominion) hit single to center scoring Tressler from second to give the Saints the early 1-0 lead.

The very next batter Nickolas Pagan (Hartford) went after the first pitch against the Oaks starter and hit a three-run home run to right field to push the lead to 4-0.

“I saw that the first couple of batter swing at the first pitch and I was thinking he was going to come with the first-pitch fastball, and I was ready for it,” Pagan said.

The Oaks scored two runs on Saints starting pitcher Justin Kleinsorge (Regis) in the top of the second to cut their deficit in half.

After a scoreless third inning, the Oaks jumped on Saints pitcher Isaiah Ramos (Antelope Valley) in the fourth as they loaded the bases with just one out of the inning. Ramos was removed for Chris Burnette (Cal Poly Pomona) who struggle with his command as he walked four batters in the inning. The Oaks scored three runs in the inning and all of them via a walk. Burnette managed to get out the inning striking the last batter out, but the Oaks took the 5-4 lead.

Looking to tie the game in the bottom of the fourth, Matt Thomas (Harvard) walked with two outs and moved to second on a wild pitch. David Reyna (Arkansas Monticello) hit a single to left scoring Thomas from second to tie the game at five.

The fifth and sixth were scoreless for both teams but in the bottom of the seventh, the Saints managed to take the lead as Anthony Forte (Richmond) hit a double down the left field with one out. Forte moved to third because of a ground out and scored on an infield single by Thomas Luevano (USD).

With just a one-run lead the Saints broke the game open in the bottom of the eighth as they scored five runs in the inning. The inning was highlighted by a three-run triple by Reyna to give him four runs batted in the game.

Jamie Robertson (Emory) kept the Oaks bats silent as he pitched four and two-thirds of an inning while striking out three batters and allowing no hits.

“Robertson pitched a heck of a game. He is a division three pitcher out here getting division one-hitters out. It was important to be able to find that guy and he did it for us,” Milam said.

Reyna went 2-for-4 with a single and a triple while driving in four runs. Pagan finished the game 1-for-3 with a home run, two runs scored and three batted in.

The Saints now improve to an overall record of 7-6 and will now head to San Luis Obispo to take on the Blues. First pitch is set to be at 4 p.m.