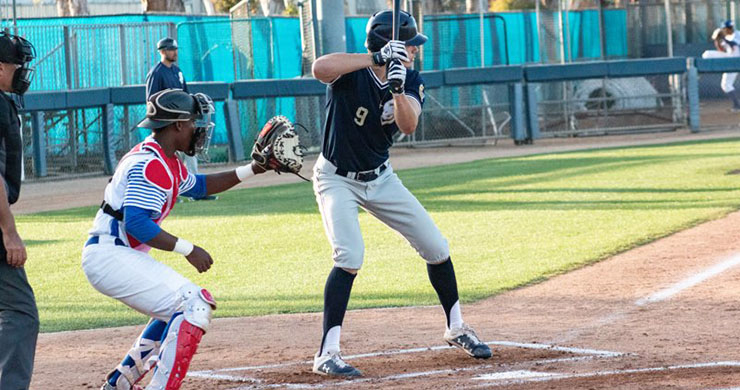 COMPTON, CA – The Arroyo Saco Saints were on the road on Sunday night as they were defeated by the MLB Academy Barons 6-3.

“We had a slow start and it’s hard to crawl uphill. You got to jump on teams quick, I think if we jumped on this team it would have gone the other way,” head coach Aaron Milam said. “There was a couple of big moments that we could have taken advantage of but that’s how this game goes.”

In the top of the first, the Saints were threatening as they had runners on first and third and only one out. Nolan Tressler (Georgia Southern) started the game with a leadoff double. Drew Cowley (Cal Poly Pomona) walked with one out and as the pitch got away from the Barons catcher Tressler moved to third. Clean-up hitter Andy Garriola (Old Dominion) struck out giving two outs for Evan Russell (Tennessee). Cowley attempted to steal second but was thrown out ending the Saints threat.

The Barons put up two on Saints starting pitcher Grant Young (San Francisco) in the bottom of the first. Young looked like he was going to get out of the inning but allowed a two-run single to right to give the Barons a 2-0 lead.

After a scoreless second the Barons added another run in the third and fourth to push the Saints deficit to four.

The Saints got on the board in the fifth as David Reyna (Arkansas Monticello) hit a triple to right to lead off the inning. Thomas McCarthy drove him in right after as he hit a single up the middle.

In the top of the seventh, Garriola led off the inning by hitting a shot over the left field fence to bring the Saints within two runs.

“I was just waiting for first-pitch fastball and it was up, the second pitch I knew he had to come back with another fastball, and I was ready for it and I pulled it,” Garriola said.

With just a two-run lead the Barons added two more in the seventh due to a couple of errors from the Saints defense.

Saints relief pitcher Michael Garza (Incarnate Word) pitched three innings in the game and struck out six batters while just allowing one hit to the Barons.

“He is really good, and we need to get him in the game more and will give him a start next week,” Milam said.

Looking for a late rally in the top of the eighth inning and with already a run on the board, the Saints had the bases loaded and only one out and Garriola at the plate. With a new pitcher in Garriola got an outside pitch and put the barrel on it but unfortunately right at the second baseman who turned the double play to end the Saints threat.

The Saints now have an overall record of 7-8 in the season and will have an opportunity to get their revenge as they will play the Barons once again on Tuesday night. First pitch is set to be at 6 p.m.