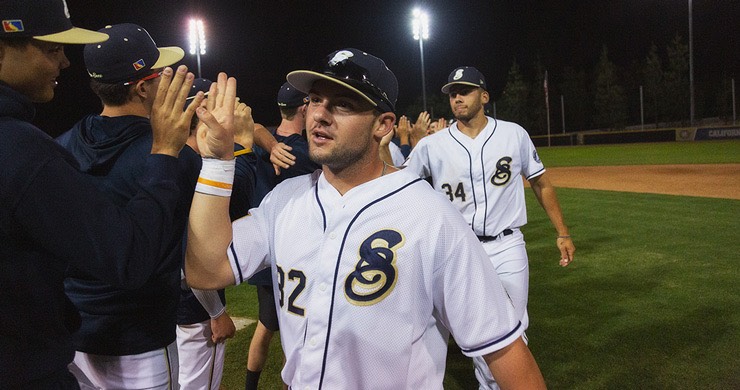 It didn’t take long for the Saints to take the lead after breaking the game open in the bottom of the first. Shortstop Drew Cowley (Pomona) sent a grounder to the Oak’s second baseman and was safe at first on a fielder’s choice. He scored the first run of the evening off second baseman Thomas Luevano’s (San Diego) double to center field. Designated hitter Andy Garriola (Old Dominion) brought Luevano home with a single to right field to take a 2-0 lead.

The Oaks were threatening with two runners on and two outs in the second inning when a line drive was sent into center field. Center fielder Christian Scott (Tennessee) made an impressive diving catch to get the Saints out of the inning with no runs against.

In the bottom of the second inning, catcher Jacob Wyeth (Cisco) opened it up with a hard grounder to left field for a single. Third baseman Wyatt Stapp (Cincinnati) followed with another hard hit single to left. Scott then hit an infield single to load the bases. Left fielder Nolan Tressler (Georgia Southern) hit a hard grounder to the Oak’s first baseman, but was safe on a fielder’s choice. With the bases still loaded and one out, Forte hit a grounder to second and was safe on a fielder’s choice, to bring in Stapp. After the Oak’s walked Cowley to load the bases, again, Luevano drove in Scott and Forte with a single to center to make the score 5-0.

The Oaks scored four runs in the top of the fourth to close the score to 5-4.

The Saints rallied for an exciting bottom of the fourth with a chain of remarkable at bats to score seven runs. Scott started the inning off with his second infield single of the night. After stealing second, he was brought home by Tressler’s single to center. Forte then blasted a two-run home run out of right field to increase the Saints’ lead by four. After walking both Cowley and Luevano, Garriola loaded the bases by outrunning a throw from third to first. With no outs, first baseman Pete Derkay sent a missile over the right field wall for a grand slam.

“I just went up to the plate and tried to slow everything down and relax as best as I could,” Derkay said. “I knew the pressure was on the pitcher and he had to come get me, so I just let him do that, put a good swing on the ball, and the rest is history.”

Righty Michael Garza (Incarnate Word) started on the mound for the Saints, pitching a total of five innings and striking out four. He was relieved in the top of the sixth by righty Justin Kleinsorge (Regis).

The Saints offense continued to bring the heat in the seventh inning with a two-out rally. Cowley singled to right, before stealing second. Pinch hitter David Reyna (Ark-Monticello) hit a line drive to center to score Cowley. Garriola then found a similar gap in center field to bring in Reyna. Derkay made his way to the plate and hit an infield single to bring in Garriola for the final run of the evening.

Derkay ended the night going 2-for-4 with four runs batted in. He is a recent addition to the Saints from the University of Tennessee where he plays in the Southeastern Conference.

“We have some great players out here, it’s good competition and I like it,” Derkay said.

The Saints take on the Orange County Riptide on Sunday at Jackie Robinson Memorial Field. The first pitch will be thrown at 4:35 p.m.