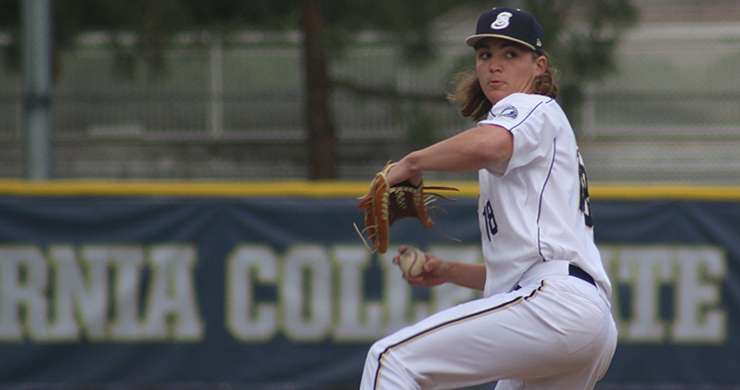 PASADENA, CA – A four-run fourth inning helped lift the Saints to a 5-1 victory over the OC Riptide on Thursday night at Jackie Memorial Field.

“The pitching really held us in this game, and we tried to go with a little bit more of an offensive line-up, to begin with, but our pitchers held the line today,” said Head Coach Aaron Milam.

The game was scoreless in the first couple of innings as neither team could get an upper hand on the team’s starting pitching.

In the bottom half of the fourth, the Saints got the inning started by back-to-back singles by Thomas Luevano (USD) and Andy Garriola (Old Dominion). With runners on first and second and no outs, Wyatt Stapp (Cincinnati) hit a grounder to first that was gathered by the Riptide first baseman, but he threw the ball away trying to go for a double play allowing Luevano to score the first run of the game.

With runners on first and third and no outs, a perfect hit and run play was executed as Thomas McCarthy (San Francisco) hit a single to left scoring Garriola and moving Stapp to third. The Saints continued to put runs on the board as Charlie Harrigan (Miami (OH)) hit a sacrifice fly to left scoring Stapp. The Saints scored four runs in the inning to give them a 4-0 lead.

“I went out there and threw a lot of strikes and that’s the main thing I tried to do and just compete with the pitches I got,” Bullinger said.

In the bottom of the sixth, the Saints got that run back as Christian Scott (Tennessee) scored on a fielder’s choice to push the lead back up to four with a 5-1 lead.

“I only hit singles but I’m taking it though. Someone gets on and score runs and gets the rally going,” Garriola said. “The pitching just closed out the whole game and you have to give credit to them as they only allowed one run to a good offensive team like them.”

In the ninth, the Riptide were threatening as they got the first two batters to reach base on relief pitcher Chris Burnette. Looking to end the game, Burnette got the next three batters to fly out to give the Saints the 5-1 win.

The Saints will now look to continue their winning ways as they will face the Conejo Oaks on Friday night at Jackie Robinson Memorial Field. First pitch is set for 6:05 p.m.