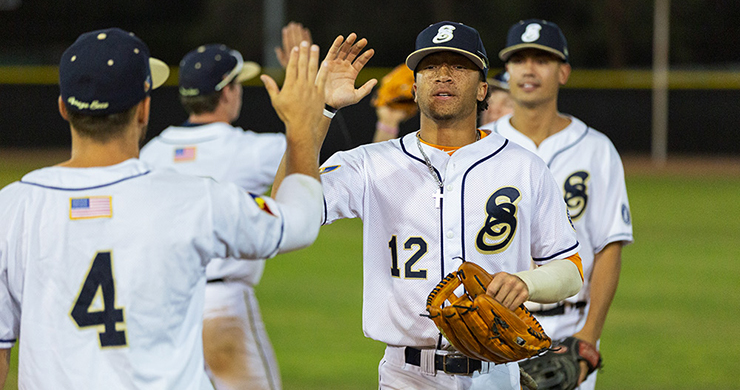 PASADENA, CA – A breakout, seven-run inning lifted the Saints to a 9-6 victory against the visiting Ventura County Pirates on Tuesday night at Jackie Robinson Memorial Field in Pasadena, Calif.

The Saints scored their first run in the third inning when right fielder Anthony Forte  (Richmond) sent a hard ball past second base for a double. He was soon brought home by center fielder Christian Scott’s (Tennessee) double to a gap in left field.

Right-handed pitcher Race Gardner (Hawaii-Hilo) started on the mound for the Saints, pitching three innings while striking out four and allowing no runs. He was relieved in the fourth by lefty Alex Cornwell (USC).

The Saints’ bats came alive in the fourth inning, when they scored seven runs and took an 8-0 lead. The offensive barrage started when first baseman Charlie Harrigan (Miami) got hit by pitch and advanced to second on Andrew Garriola’s (Old Dominion) line drive single to center field. Harrigan made his way home when shortstop Morgan Allen (St. Edward’s) grounded down the first base line. Garriola then scored on a wild pitch. Left fielder Nolan Tressler (Georgia Southern) sent a line drive over the first baseman’s head to bring in Allen for the third run of the inning. Catcher Jacob Wyeth (Cisco) was then walked. With a runner on first and second and one out, Forte sent a rocket into right field to bring in Tressler. Then, Scott hit the ball up the middle to bring in Wyeth. Second baseman David Reyna (Ark-Monticello) grounded to the shortstop and was safe on a fielder’s choice. Forte then scored on a wild pitch. Garriola made his way to the plate for the second time that inning, and singled, scoring Reyna for the seventh and final run of the inning.

“I think we caught a few breaks in that fourth inning. It ‘s a non-conference game for us, so our job is to make sure we are still dialed in,” head coach Aaron Milam said. “We want to take the win, if they’re going to give us a win. We will take them wherever we can get them.”

The Pirates added a single run in the fifth inning and another in the sixth, making the score 8-2.

The Saints brought out righty Zachary Griggs (UTSA) to relieve Cornwell in the sixth inning.

The Pirates rallied in the seventh and scored two more runs, making the score 8-5. However, in the bottom of the seventh, the Saints increased their lead by one. Allen was walked before stealing second. He was later brought home by Tressler’s double to right field.

“We are just trying to score as many runs as we can; I mean, that’s the goal. When we get more than six runs, we usually win,” Tressler said.

Right-hander Jeremy Taylor (Pomona) relieved Griggs to finish out the remainder of the game.

The Pirates managed to add a final run in the top of the ninth, but the Saints were still able to walk away victorious.

“We want what’s best for our team, just focusing and trying to score runs,” Scott said. “Being out here everyday with these guys is a great pleasure and big things are coming.”

The Saints and the MLB Academy Barons will face off Wednesday evening at Jackie Robinson Memorial Field. The first pitch will be thrown at 6:05 p.m.