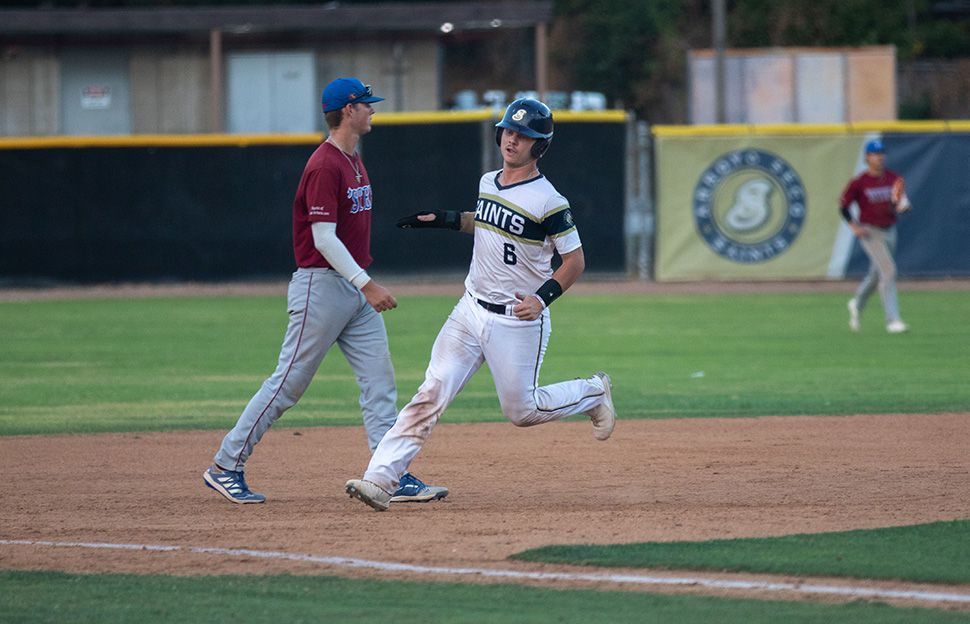 PASADENA CA — The Arroyo Seco Saints took to the field at Jackie Robinson Stadium wearing all white ready to face the Santa Barbara Foresters. It was a tough game on the diamond, but the Saints know how to learn from the process and fought through but lost, 6-5. The score was tied 5-5 for most of the game, and the Saints battled every inning, holding the Foresters at 5 runs up until the 9th inning. Although it was a loss, the team played very well, and there were great efforts from both sides of the field.
Cooper Harris (Wichita State) was a key player during this game, both defensively and offensively. With a cannon of an arm behind home plate, he can throw any base runner out anywhere on the field, which he proved last night. Throughout the game, he threw out runners stealing second and third which was huge for the Saints as they needed those outs during several tough innings. He also performed well at the plate and was the first Saints player of the game to get on base. He consistently hit and got on base throughout the game during times of need. Harris stated, “I take pride in my defense and that trickles over to my hitting, and I have been able to see the ball better these past few games.” Harris, who rarely has an off day, has worked incredibly hard this season and embodies the determination of the Saints.
Also on the defensive side, 3rd baseman Matt Marlow (Regis University) had a great game, making many plays at 3rd. The ball from the opposing team favored the 3rd base line, and Marlow seized every opportunity to attack the ball and throw to first. His consistent fielding kept balls out of play, which overall helped the Saints hold the Foresters from scoring more.
Despite a tough loss, the Arroyo Seco Saints still played a great game of baseball and have been improving and joining together as a team. As coach Milam has stated, “one of the challenges of summer ball is taking players who have never played together or met one another and trying to make them uniformed” The Arroyo Seco Saints are not letting this loss stop them as they will hit the road today, heading to Irvine to play the OC Riptide.
—
Contributors:
Nicola Iannelli (Texas)
Angie Martinez (Mount St. Mary’s)