Saints Bring the Heat in Close Game Against Foresters 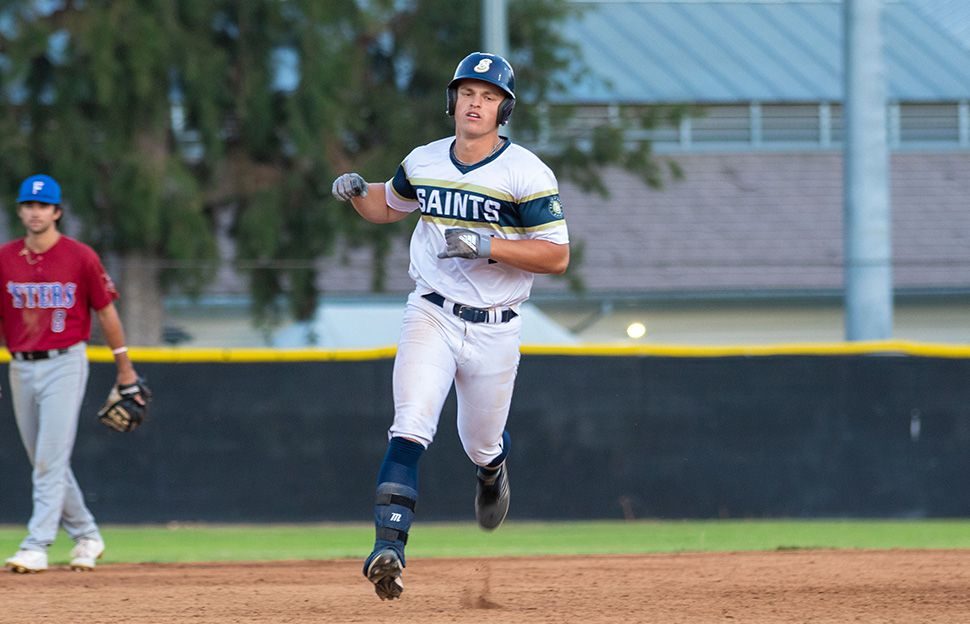 PASADENA CA- The Arroyo Seco Saints took to the field yesterday to play the Santa Barbara Foresters in what could be argued as the hottest game both in temperature and in performance. Both teams brought the heat and produced a game of good baseball. The Saints have never faced the Foresters this season and battled them throughout the night in a 3 ½-hour game, but unfortunately lost their grip on them in the 7th inning, losing 12-9.

As proven in previous games, the Saints have established consistent hitting and had no issue with putting runs on the board. Their starting lineup of three lefties has shown it brings the heat at the plate. In the first inning Dylan Johnson (Gonzaga) hit a huge triple followed by Kyson Donahue (Hawaii) and Matt Wong (Hawaii) both slamming doubles and bringing in runs. The offensive highlight of the game was when Matt Wong stepped up to the plate in the 5th inning and hit his second home run of the season. Following directly after him in the batting lineup, Nate Becker (Rice) also hit his second home run of the season. The Saints continued to hit consistently throughout the game and had many RBIs which helped them attain their 6-4 lead by the end of the 6th inning.

Defensively the team has a field of iron. The infield and outfield have displayed their consistency to keep balls off the ground and out of the field. In the 2nd inning there was an amazing around the horn 5,4,3 triple play by Drew Cowley (Oregon), Peyton Holt (Arkansas), and Jacob Sanchez. It’s plays like those that not only build the players’ confidence but help bring the team to a victory.

Pitching was an area of growth and struggle as the Saints started off the game with pitcher Trayson Vogt (Crowder) who pitched the first three innings and gave up three runs. Jonathan Carlos (Long Beach) was put in next for the 4th and 5th innings and was able to hold the Foresters to 3 runs. The 7th inning was a long and difficult one for the team, as their pitchers struggled to settle down on the mound, but Drew Zittel (Biola) stepped up when he was put in during the middle of the inning. Zittel was thrown into a tough situation, bases loaded with no outs. He recalls how he had not even warmed up and, “was watching the game when I was suddenly being called onto the field. I did not think I was playing at all in this game, and it was very last minute.” Despite the abrupt notice, Zittel was able to throw strikes and get the Saints out of what had become a 45-minute 7th inning. In the 8th he was able to hold the Foresters to no runs and got three outs in record time compared to the previous innings. In total, he had 3 strikeouts during the game which was the most from any of the 6 pitchers that game. Zittel represents the Saints undeviating determination when they play.

Even through the highs and lows of the game, the team remained hopeful and kept their heads in it until the very end. The Arroyo Seco Saints will bring the heat again today against the Santa Barbara Foresters this evening at Jackie Robinson Field at 6:05 pm.