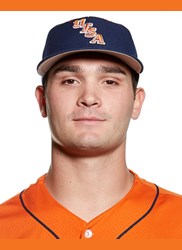 Prior to UTSA
Prepped at Medina Valley High School … a three-year letter winner under head coach Robert Herb … batted .333 and posted a 2.00 ERA en route to All-City team honors as a senior … also named the team’s offensive MVP in final two seasons … hit .400 as a junior and earned first-team All-5A District 26 … also a first-team all-district pick as a sophomore after posting a .450 batting average and 1.35 ERA … member of the National Honor Society.