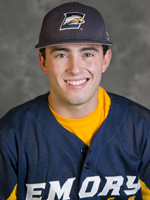 Played in 19 games, making 16 starts as a junior…Tallied nine hits in 43 at-bats with seven runs, one double, three RBI and 12 walks…Went 1-for-3 with two RBI against Piedmont College on March 11th…Was 1-for-2 with one RBI and walk against Case Western Reserve on March 24th.

Appeared in 17 games, making 12 starts as a sophomore…Collected 11 hits in 39 at-bats for a .282 average with one double, two RBI and three stolen bases…Went 2-for-4 with his first run driven in of the year against Brandeis University at the UAA Championships on March 8th…Followed that up with his lone three-hit effort, going 3-for-3 with a double and a stolen base against NYU on March 10th.

Kerner played in 16 games, making five starts for the Eagles during the 2015 season. He totaled three hits on the year with one RBI and one run. He was a perfect 36-for-36 in chances in the field for Emory.