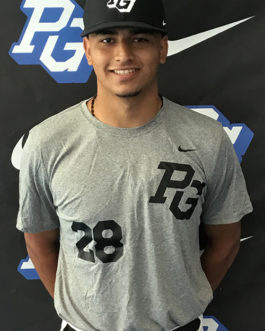 Ramirez is a righthanded pitcher and infielder at Salesian HS, where he has been on varsity for his entire high school career. After making six starts as a freshman, he transitioned to more of a relief role as a junior when he struck out an impressive 46 batters in just 24.1 innings pitched. His best performance last season came in his first trip to the mound, as he threw seven innings of three-hit ball, striking out an impressive 18 batters in a 2-1 win over Cathedral.

At the plate, Ramirez is a .300 career hitter in 78 games played the past three years. He has scored 48 runs and driven in 52 more with 11 stolen bases in his high school career. He also plays travel ball for Blackhawks National and competed at the 2018 WWBA World Championship this past October in Jupiter, Fla. He also participated in the 2018 Perfect Game National Showcase in St. Petersburg, Fla. and played in the 2017 and 2018 17U Perfect Game World Series Arizona.

Ricabal: “Luis is a big, strong right-handed pitcher out of Salesian High School in Los Angeles. Luis has a chance to be a power arm on our staff. His fastball has been up to 93-94 MPH with a tight, late-breaking curveball. He is athletic for a big, strong kid and he also plays shortstop and third base on his high school team. We look for Luis to compete for significant innings immediately, and he has the potential to be a key component to our pitching staff as a freshman.”