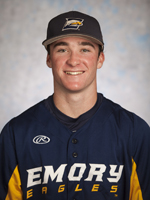 Appeared in 10 games as a starter while making seven starts on the mound…Went 3-4 with one save in 45 innings of work, compiling a 4.60 ERA and 37 strikeouts…Earned his first career win on March 17th against Middlebury, allowing two runs, one earned, in 5.1 innings…Tossed a third of an inning, recording the final out in Emory’s 12-10 win over Covenant on March 27th to lock down his first career save…Was named the UAA Pitcher of the Week on April 16th after striking out a career-best 10 batters in a personal-best eight innings, allowing just one run on three hits against Brandeis on April 14th…Went eight innings again in his final start of the year on April 28th at NYU, earning the win by giving up just two runs on six hits across the eight frames.

Appeared in one game as a freshman, making his collegiate debut in the NCAA tournament versus Rowan University…Pitched a third of an inning, allowing no runs on two hits.

Played four seasons for the Notre Dame High School baseball team in Sherman Oaks, CA under Head Coach Tom Dill…Two-time Scholar Athlete as a junior and senior…2016 Second Team All-Mission League…Went 4-2 on the bump with 44 strikeouts and a 1.21 ERA in 57.2 IP as a senior…Also participated in football.

Born on May 5th…Son of Jim and Mel Robertson.

Why he chose Emory?

“I chose Emory because I got a chance.”