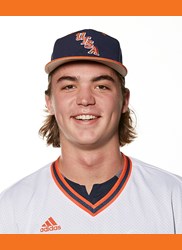 High School Earned three letters at Samuel V. Champion High School where he played the outfield and also appeared on the mound … batted .400 as a senior and recorded six home runs with 33 RBIs … named 27-5A District MVP in 2016 and earned on a spot on the first team all-district team as a junior … garnered all-state and San Antonio Express-News Super Team honors and helped the Chargers to the state quarter finals … named to the academic all-state team.