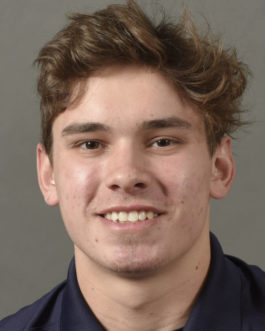 PREP: A three-time All-League selection at Damien High School in California, earning First Team honors in 2016 and 2018 and Second Team in 2017 … Helped lead Damien to a 2016 Baseline Lague title and the 2016 CIF semifinals … Also played club ball for CBA Marruci … Chose ODU because it was a good fit and provided the best opportunity to enhance his baseball career.

PERSONAL: Son of Scott and Lisha Garriola … His brother, Frank, plays baseball at Hope International University … Favorite pro teams are the Dodgers and Rams and his favorite athletes are Johnny Manziel, Josh Hamilton and Jackie Robinson … Enjoys EDM, rap and rock music, especially Van Halen and Hippie Sabotage … Favorite foods are spaghetti with no sauce, Italian sandwiches and In N Out … Enjoys going to the beach.