Suspended by Darkness, Saints Wait to Play Out Game Against Foresters 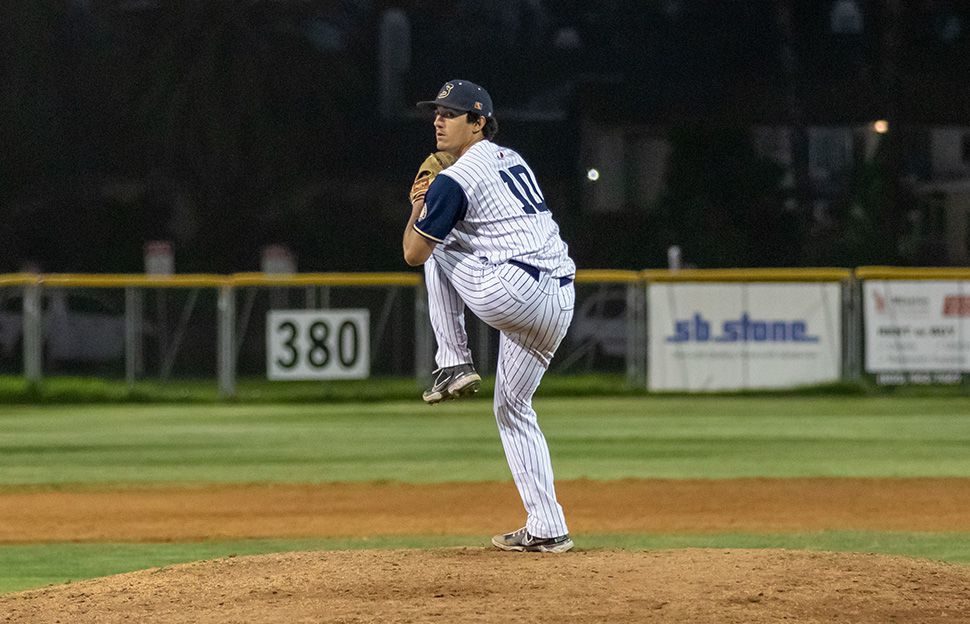 SANTA BARBARA, CA – The Saints faced off against the Santa Barbara Foresters on July 1st at Pershing Park in Santa Barbara, Calif. The game was highly contested throughout, and the two teams played twelve innings before the game was suspended due to darkness.

The Saints got off to a hot start in Santa Barbara when a first pitch single by Drew Cowley (Oregon) led to a two-run homer just two pitches later by Peyton Holt (Arkansas).

Zach Jacobs (Long Beach St.) kept the Foresters quiet in the bottom of the first with the help of Cooper Harris (Wichita St.), who nabbed a runner attempting to steal second.

Then Jacobs proceeded to strikeout the side in the bottom of the second.

The Saints extended the lead to three in the 4th inning after Jordan Rogers (Wichita St.) led off the inning with a single and Jack Walker (Louisiana Tech) brought him around to score with a single of his own.

Jacobs struck out three more in the bottom of the inning, but the Foresters tied up the game at three apiece.

The Saints swiftly retook the lead in the top of the fifth after Peyton Holt hit a double to start the inning and stole third base. Kyson Donahue (Hawaii) then sent a sacrifice fly to center field to bring him home. Fellow Hawaiian Matt Wong (Hawaii) followed up the sac fly with a home run to deep center field to extend the lead. The squad polished off the inning with the third home run of the game off the bat of Nathan Becker (Rice).

The Foresters responded in the bottom of the fifth with a run of their own, but in the top of the sixth Drew Cowley reached on a single and came around on an error, a passed ball, and a wild pitch to score nearly immediately.

The Foresters tied up the game in the bottom of the 7th, and no one scored again until the game entered extra innings.

The Saints scored a run in the tenth inning when Jeffrey Bauser (Nevada-Reno), who was the tie-breaker placed on second to begin extras, came around to score on a Kyson Donahue double.

The Foresters responded in the bottom of the tenth, and the game remained tied until the end of the twelfth inning when the lights went off and the game was temporarily ended.

The Saints were kept in the game by an amazing performance from Jacob Henderson (Iowa) who was backed up by some spectacular defense, throwing five innings in relief and striking out four while only giving up one run. Henderson spoke to the importance of just “just filling up the zone”, as well as getting outs and ground balls and letting his defense make plays.

Peyton Holt was the owner of a homerun and some of the defense that kept the Saints in the game. Holt placed emphasis on relaxing and playing his game. He said that you often “find yourself pressing in those situations” and it is important to just “react, play with the left part of your brain”.

The Saints will play out the rest of this game before their next matchup against the Foresters on July 7th. The Saints next game will take place on Sunday, July 3rd at Sinsheimer Park in San Luis Obispo against the Blues at 6:00 p.m. PST.