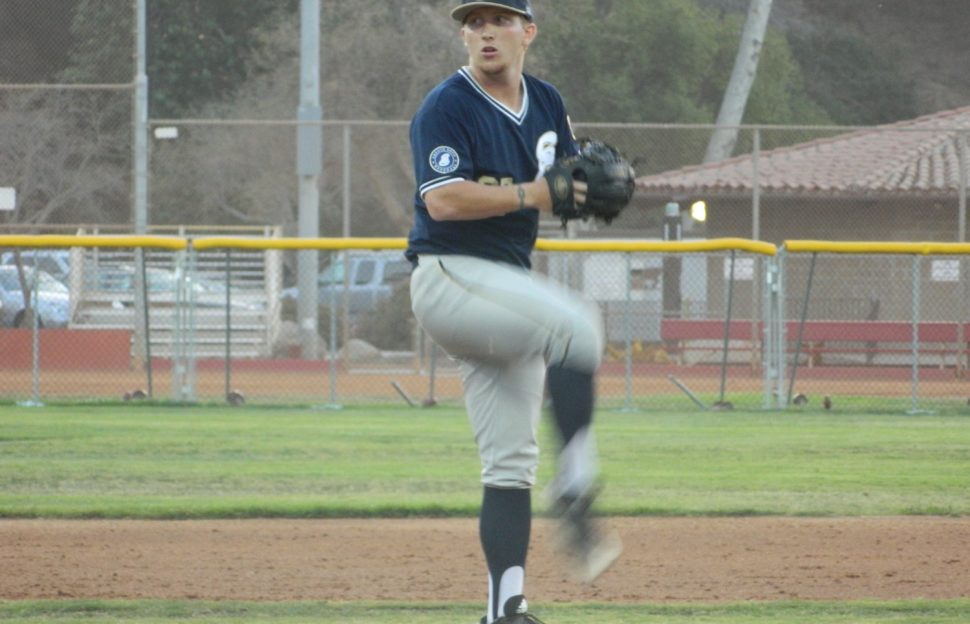 PASADENA, Calif. – The Arroyo Seco Saints are on a hot streak, winning five consecutive games and now stand at first place in the Southern Division of the CCL. The Saints defeated the OC Riptide 2-1 in a defensive battle at Jackie Robinson Memorial Field tonight.

“We competed well, and when you compete well and throw strikes, you win games,” Saints first baseman Tyler Durna (UC San Diego) said. “That’s what we did today. It was a close game but we came out on top.”

The Saints didn’t waste any time scoring their first run, as Durna drilled a solo home run to give the Saints a 1-0 lead in the first inning.

“I kind of went back to my original approach in finding my swing again, and it clicked right there. I got a pitch I was able to handle and I just hit it up,” Durna said.

Durna was the Saints top offensive performer of the night, going 2-4 at bat with the one home run.

After this, runs would become scares for the majority of the game. The Saints would not score again until the fourth inning, where a wild pitch would bring in Blake Burton (University of Washington) home from third base.

The Riptide scored one run in the fifth inning due to a base hit that brought in a runner from third. The Riptide had more hits on the night compared to the Saints, but great pitching and defense helped lead Arroyo Seco to victory.

“It was good just to have a team victory,” Saints head coach Anthony Chevrier said. “To have good performances by all three [pitchers] that went out there, to be able to execute and get the job done feels good.”

Tommy Costello (University of Washington) was the Saints starting pitcher and recorded three strikeouts against the Riptide in over the first four innings of play. Josh Little (North Carolina Central University) came in as relieving pitcher for the Saints, recording two strikeouts of his own on the night.

Perhaps the most impressive of the night was closing pitcher Tim Turner (George Mason University), who came in in the middle of the seventh inning. The left-handed pitcher was on point for the Saints, only throwing nine balls while recording 24 strikes and two strikeouts.

“Turner has looked really good,” Chevrier said. “When he first came out here, he was a little shaky and had trouble with fast ball command, but in his last three outings, he has been pinpoint accurate and throwing strikes. He did a great job tonight.”

One of Turner’s two strikeouts would end the game in the ninth with a Riptide baserunner stranded on second base. He said that it felt great to throw the game-winning strikeout, but that he was just doing his job in helping his team. Turner also expressed that the communication and relationships between the team is at an all-time high, which has helped lead to their success.

“It felt great and I’ve been working really hard for it. My first couple of outings were not really the best, and I just wanted to help out the team,” Turner said. “I’ve only known these guys for a month, but I feel pretty close to them and I want to win and do well for everyone around me. I know everyone else feels the same. I’ve never been on a team that has gelled this quickly before.”

The Saints, who are now 11-7 in league play (12-8 overall) swapped positions with the Riptide, who are 12-8 in league (15-8-1 overall) for first place in the Southern Division of the CCL. The Saints are in position to earn a playoff berth as they own the tiebreaker over the Riptide, 3-2 this season. The two teams will face off against each other one last time before the CCL Playoffs on July 13.

The Saints look to continue their winning streak as they will go on the road to take on the San Luis Obispo Blues at 6 p.m. on Wednesday.