Saints With Near-Rally in Final Game of Season 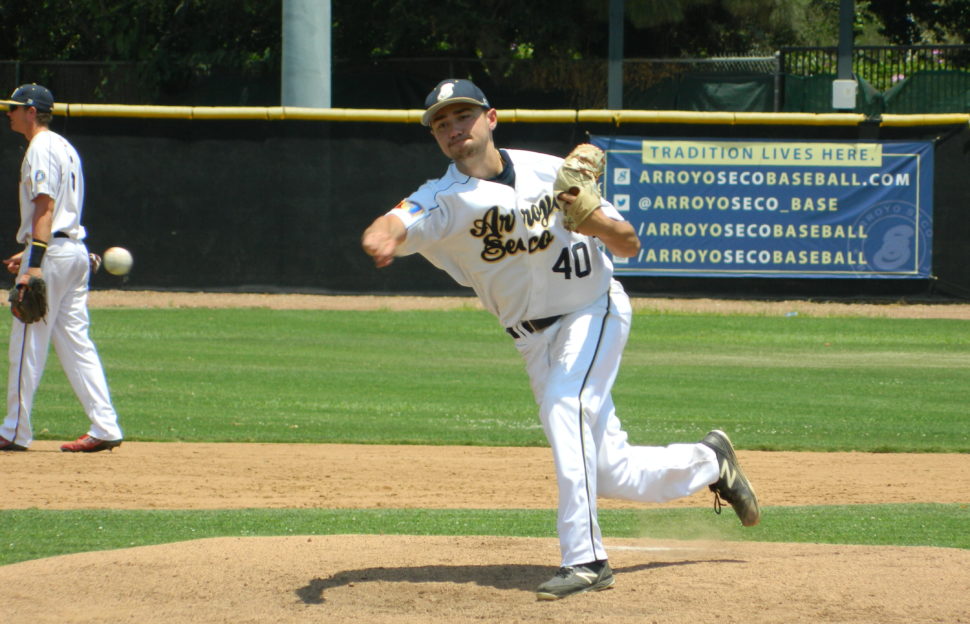 In the Final Game of the season for the Arroyo Seco Saints, played at Brookside Park, we saw two season-long contenders go head to head. The Saints have been eliminated from playoff contention for a week now, but the Blues were just eliminated two days ago, which would make for an eventful last game of the year at Jackie Robinson Memorial Field capping off the 2017 season.

On the hill for the Saints was Coastal Carolina product, Gordon Ingebritson, where the Saints saw a total of seven pitchers on the night, Gordon would start the game allowing two early runs in favor of the Blues. The Saints would manage to cut the lead in half at the bottom of the inning when a Tyler Durna (UC San Diego) single brought home Alex Briggs (LIU Brooklyn), to make the score 2-1 Blues.

Connor Cuse (Stanford) would start the second inning for the Saints, and the Blues would add three more runs. The Blues would lead 5-1 heading into the third inning.
Dellan Raish (Arizona State University) would follow Cuse, he would come into the game with the Saints trailing 6-1.
The game would get within reach for the Saints as Durna and Blake Burton (University of Washington), and Brennan Mackenzie (University of Cal Pomona) score to make it 6-4 in the bottom of the third inning of play.

Grant Vogenthaler (San Francisco State) would come in to pitch the fourth, allowing two more runs for the Blues. The game would now 8-4.
The Blues would keep this momentum until the end of the game where they would have a commanding 11-5 lead over the Saints. At that moment, was when the Saints showed their poise and reliance that they’ve shown all season long, narrowing the gap to two runs in the bottom of the ninth.

Leading the charge were two new additions for the Saints, Brock Bell and Anders Kim, who together scored four runs for the Saints in the bottom of the ninth. Unfortunately, it was not enough to take the spotlight from the Blues, as they dropped their final game of the season to the San Luis Obispo Blues 11-9.

Despite the loss, Saints took the opportunity to comment on the team’s overall production on the season after the game, starting with pitcher Tim Turner, who handled ninth inning duties for the Saints in Thursday’s loss.

Turner shared ‘This is my last summer ball season, so it was a good one to go out on” Turner, who will graduate George Mason in the Spring. “I grew personally, and I was happy to meet a bunch of guys from California’

Gabe Golob (New York University), Also talked about his personal success, saying, ‘This is my first time being out here playing summer ball, it was nice to learn from the examples of guys like Tim and Alex (Briggs), and I was very grateful to learn from such a great group of guys.’

Briggs would add on the team’s ability to keep a constant momentum as the season went on, ‘We have a great group of guys with the passion for the game, and that’s really what drives it.’
‘When you find guys with that kind of passion it gives you to the chance to bond with your teammates, but also to get through the 39 games; overall it was a fun season for us.’

Saints finished the season with a 21-18 overall record and finished 2nd in the Southern Division of the CCL with a 19-17 league record.