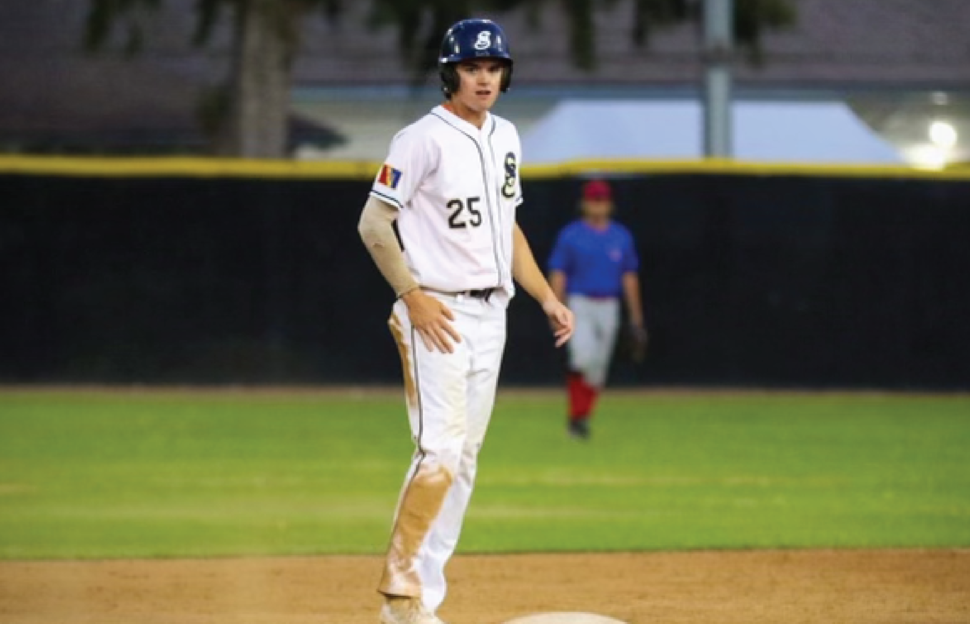 PASADENA, CA- A deep fly ball to center field from Connor Bradshaw (Pepperdine) ended the game in the bottom of the ninth, as Arroyo Seco fell short to the San Diego Waves 8-7.

Chris Stamos (Glendale CC) got his first start on the mound tonight for the Saints. Despite giving up two unearned runs, Stamos pitched lights out. He had four strikeouts in four innings, and gave up just two hits.

The Saints’ bats were aggressive early, as Bradshaw led off the inning with a triple down the right field line. Drew Cowley (Cal Poly Pomona) blasted an RBI double to score Bradshaw. Josh Cowden (BYU) slammed an RBI single into right field, giving the Saints a quick 2-0 lead.

Four more runs scored for the Saints in the bottom of the fifth inning. Tanner Lindsly (Oral Roberts) roped an RBI single, then Blake Marsh (Undecided) walked in a run. Jackson Cobb (Crowder) executed an RBI sac fly, and Bradshaw delivered again with an RBI single.

Derek Yoo (Columbia) came in for relief, but the Waves answered right back. They scored five runs in the top of the seventh inning to make it 8-6.

The Saints rallied in the bottom of the seventh, as Cobb got the inning started with a base hit. Another RBI single for Bradshaw cut it to a one run deficit.

The center fielder ended up going 4-5 on the evening, with 2 RBI’s and one run.

“I’ve just been trying to stay with the approach that I’ve been working on every day in batting practice,” Bradshaw said. “Just trying to drive the ball to the opposite field, and I’ve been finding a whole lot of success doing that.”

Fino Amador (Cal State Los Angeles) and Dom Dirado (Binghamton NY) kept the Waves scoreless, as Amador had a one, two three, inning in the top of the eighth. Dirado came in at the top of the ninth and struck out three batters.

The bottom of the ninth rolled around, and the Saints looked to repeat another win in walk-off fashion. Lindsly roped a base hit into center field, but that would be the only hit of the inning.

Despite the tough loss, the Saints have stayed hot, with a 5-1 overall record this week.

“I think as a team, we’re just hitting the ball really well, and our pitchers are throwing strikes, and getting us out of innings,” Bradshaw said. “Offensively, we’re just driving the ball and scoring a lot of runs.”

The Saints have an off day tomorrow, but look to even up the non-conference match up as they travel to San Diego on Tuesday against the Waves. First pitch is at 6:00 p.m PST (Escondido, HS).Catch the action on the Saints Youtube and social media channels.