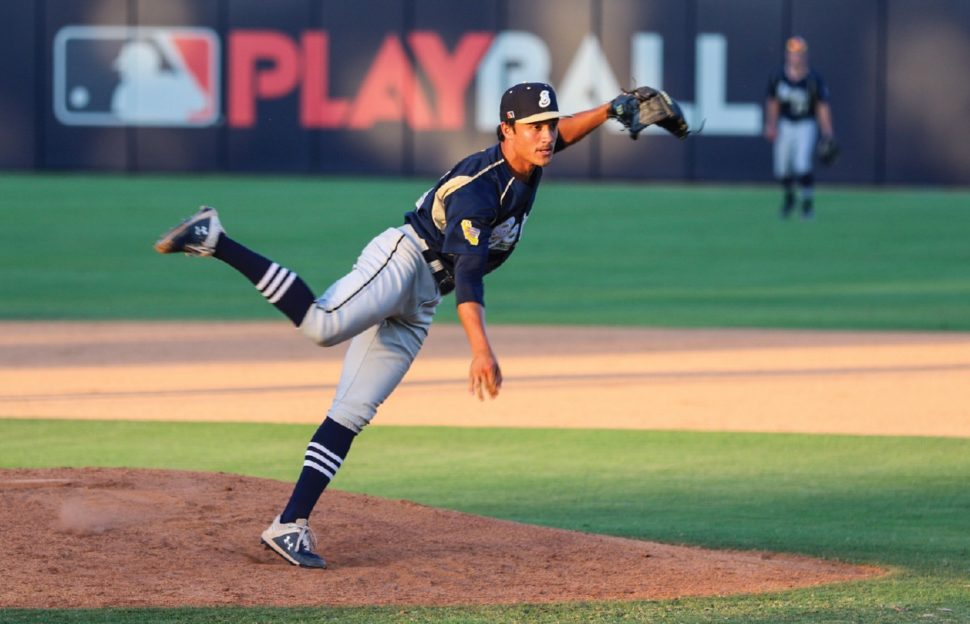 COMPTON,CA- The Saints lost their first league game in 9 contests, as Arroyo Seco fell to the MLB Academy Barons 7-4 in Compton, Calif.

Drew Cowley (Cal Poly Pomona) came to the plate and hit a sacrifice fly to left field to make it a quick 1-0 Saint’s lead.

The Barons answered right back in the bottom of the first, with back to back RBI’s to make it a 3-1 Baron’s lead.

Dom Dirado (Binghamton) got his first start for the Saints, but gave up seven hits and five runs.

Despite the Baron’s lead, the heart of the Saints lineup delivered once again. Bradshaw had another infield single in the top of the third, and then Cowley roped a double into right field. Peyton Lewis (Texas State) hit a grounder right to the first basemen, but scored Bradshaw to make it a 4-2 ball game.

The Saints had another opportunity to capitalize with the bases loaded in the top of the fourth, but Bohning grounded out to end the inning.

Trevor Kniskern (Pepperdine) came in at the bottom of the fourth to relieve Dirado. Kniskern did his job keeping the Baron’s off the board, as he had two strikeouts in four scoreless innings.

“Tonight, I predominantly worked the fastball,” Kniskern said. “I just wanted to find barrels to have my defense do the work for me. Good things happen when you throw strikes.”

Kniskern threw four innings, the most he’s pitched this summer.

“My endurance has definitely improved slowly but surely,” Kniskern said. “Just increasing my pitch counts, and a good build up helped me. I was definitely feeling it in the end, but it was good.”

The Saint’s bats didn’t heat up until the top of the seventh, as Jake McMurrary (Oral Roberts) slammed a base hit into center field. Bradshaw smoked an RBI double into center field to cut it to a 5-3 deficit.

Bo Willis (Northwestern State) scored on a passed ball in the top of the eighth to put the Saints within one, but that would be the last run the Saints would score.

Korey Shepard (Azusa Pacific) came in on the mound, but gave up a two run homer to make it 7-4 Barons lead.

With about two weeks left of the regular season, Knisern emphasized how important it is to stay rested and prepared for this last stretch of games.

“It’s really important to take yourself out of the game a bit, to clear your head and just prepare mentally for the rest of the road,” Kniskern said. “You don’t want to overcompensate things, just stay focused.”

The Saints have an off day today, but are back on the field on Friday to face the Conejo Oaks on the road at 4:30 PST. Catch the action on the Saints Youtube and social media channels.

Highlights From Saints 7-4 Loss Against the MLB Barons