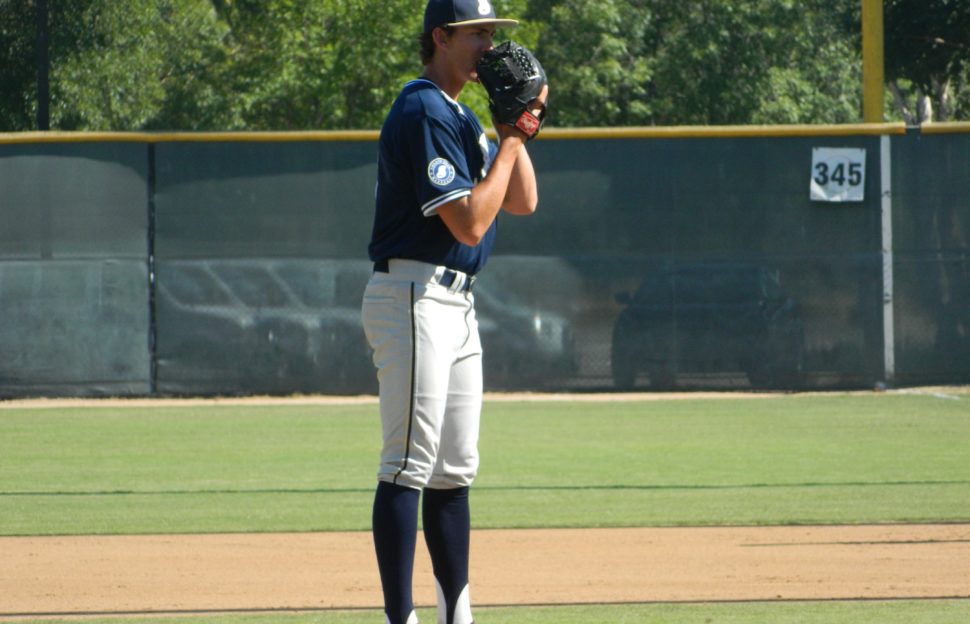 PASADENA, Calif. – The Arroyo Seco Saints got their first non-league victory of the season, defeating the OC Surf by a score of 11-9 at Jackie Robinson Memorial Field, but not without some strange and unexpected twists.

After the Saints would build a solid lead early, the Surf would come back late in the game to take the lead, prompting the Saints to respond back offensively in the eighth.

“Even though we were down, we just had to come out and compete. It’s not over until the fat lady sings,” Saints outfielder Greg White (North Carolina A&T State University) said.

The Surf are the current Sunset League champions and are the secondary team to the OC Riptide of the CCL. Unexpectedly, the Surf arrived to today’s game with only nine available players and they even skipped pregame batting practice.

The Saints would explode onto the scoreboard first, scoring five runs in the second inning. Both catcher Scottie Graham (Loyola Marymount University) and Greg White hit two RBI’s each, putting the Saints up 4-0. Dustin Krob (University of Dayton) would then hit an RBI single to right field, bringing in White for the fifth run.

“Today I was just trying to be aggressive. I’ve been more tentative at the plate, but today I just let it fly,” Graham said.

In the fourth, the Surf would finally get on the scoreboard, scoring two runs. The Saints would add another run at the bottom of the fourth to gain a 6-2 lead. However, the tide would change quickly for the Saints. What seemed to be a simple victory was turned into a stunning comeback by the Surf.

After strong performances by pitchers Kyle Merkel (Undecided, previously San Diego State University) and Brett Weisberg (Pierce College), who combined for eight strikeouts on the day, pitching began to struggle for the Saints. In the seventh inning, Conor Cuse (Stanford University) allowed four unearned runs, which led to the Surf tying the game at six. In the eighth, the Surf would hit a three-run homer to gain a 9-6 lead.

The Saints offense would come back aggressively at the bottom of the eighth, scoring another five runs in order to take the lead once again, 11-9. The Surf would not be able to comeback in the ninth, leading to the Saints victory.

Saints head coach Anthony Chevrier expressed that he was proud of the way his players were able to come back in order to get the win, but admitted that this game should have never been as close as it was.

“Obviously, you want to compete and win every time you step on the field, but it was great to see the guys dig deep and do what it takes to get a W,” Chevrier said. “Offensively, we did a really good job. We put together some crooked numbers. Pitching wise, there’s a couple guys that we expect more from. We don’t expect perfection by any means, but we expect them to be able to execute their pitches, go after guys and spam the zone from there.”

Of the nine runs scored by the Surf, only three were earned runs.

“There was some frustration [regarding the Surf’s comeback], but our bats were able to help bring us back and get our minds right,” Graham said.

“I just hit it hard somewhere. That’s the only thing I could do, and today it turned out in my favor,” White said after his performance.

The Saints will have a day of rest before taking on the OC Riptide on Monday at Jackie Robinson Memorial Field at 6:05 p.m. The Riptide are currently in first place of the Southern Division in the CCL with a 15-7-1 overall record (12-7 in league), while the Saints trail right behind them at second with an 11-8 overall record (10-7 in league).