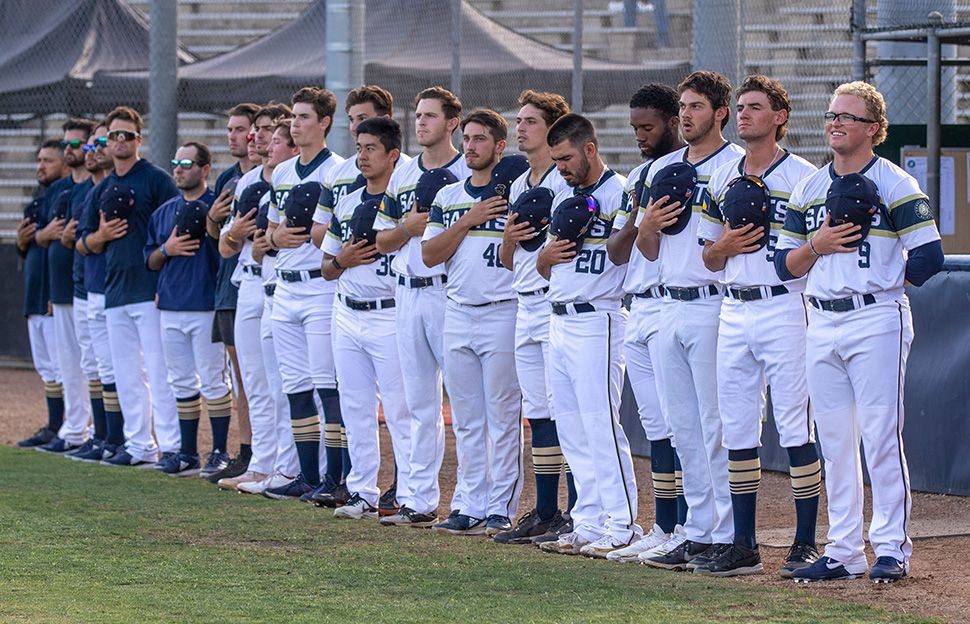 PASADENA, CA – The Saints’ 2022 season opener against the Ventura County Pirates ended in a 5-5 tie because of technical difficulties during the ninth inning at Jackie Robinson Memorial Field in Pasadena, Calif.

The home team had a slow start and found themselves trailing 5-1 early, thanks in large part to a four-run third inning for the Pirates.  However, strong pitching from Saints relievers Caleb Pittman (Northern Illinois) and Drew Zittel (Biola) kept the Saints in the game.

Pitching a combined 4.2 innings, Pittman and Zittel allowed only three hits and struck out five batters, preventing Ventura County from extending their lead.

In the bottom of the sixth inning, the tide began to turn in the Saints’ favor as Zittel, Jordan Rogers (Wichita State) and Cooper Harris (Wichita State) were all walked.  With the bases loaded and only one out, Jeff Bauser (Nevada) hit an RBI single into right field, making the score 5-3.

Staying relaxed at the plate was key to Bauser prolonging his duel with Pirates right-hander Daniel Parra (L.A. Valley College) and eventually making a game-changing play.

“Going into it, I was really just trying to stay calm and drive the ball the other way,” recalled Bauser.  “Early on in the at-bat, he was pounding me in, in, in all day.  I just kept fouling it off and finally got that pitch away that I was looking for…”

The Saints’ dominant pitching continued in the eighth, as reliever Logan Deskin (Regis) shut down the opposition, striking out two Pirates and keeping Arroyo Seco within a run.

During the same inning, Bauser recorded his third hit of the evening and Jashia Morrisey (Long Beach State) was walked before Max Blessinger (Pasadena CC) knocked an RBI base hit into center-field, evening the score at five.

With a tie ballgame heading into the ninth, a thrilling finish was undoubtedly in store.  However, just before the inning began, the lights at Jackie Robinson Memorial Field unexpectedly shut off, prompting the umpires to prematurely end the match.

Despite the earlier-than-scheduled conclusion of the game, Saints Manager Aaron Milam had a lot of positive takeaways.  He said that slow starts in a season opener are expected, but his team impressed him on both sides of the ball.

“Our pitching was really good…  We learned a lot about what we’ve got there, and those guys are pretty good,” said Milam.  “…Secondly, it’s the first day against live pitching.  And for them to be able to go through the lineup a couple of times and figure that out already is a good sign.”

The Saints open conference play tonight at Great Park Baseball Stadium in Irvine, as they take on the Orange County Riptide at 6:35pm.  Tune into the Saints’ YouTube and social media channels to follow the action.