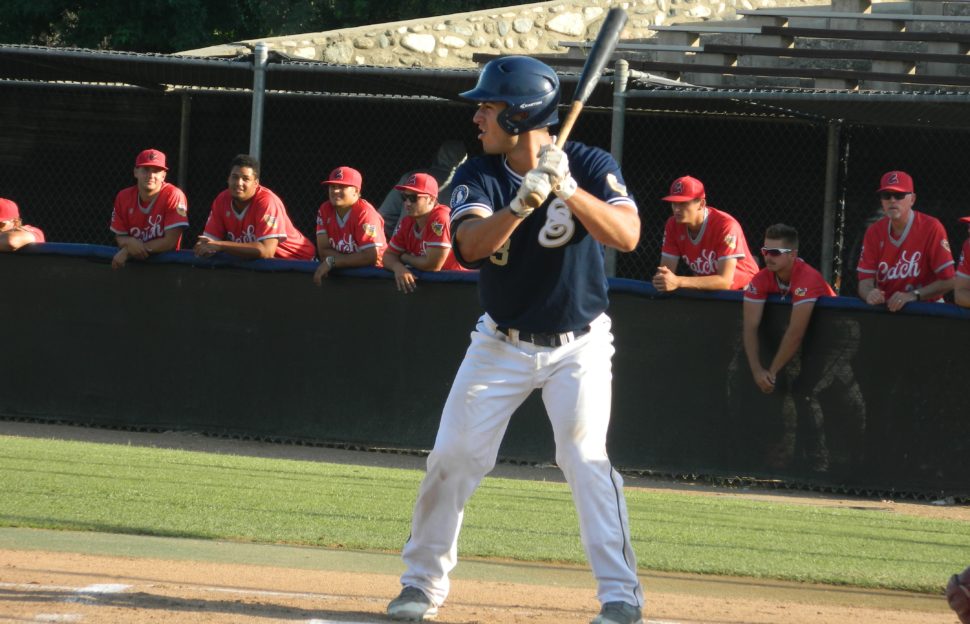 In the first game against the Long Beach Legends, The Arroyo Seco Saints played a tight defensive game to overcome a low scoring affair on Friday. Relying on defense, Gordon Ingebritson (Coastal Carolina) would pitch a complete game, one run game to help the Saints hold onto the win.

Ingebritson would pitch the first complete game of any Saints pitcher this season. His lights out pitching would help the Saints keep the game low scoring and pull out a victory, 3-1. Through the nine-innings pitched he would give up 4 hits, 1 run, and strike out six batters.

“It’s nice to get quick outs, keep the guys out of the sun and have them come up to the plate and hit,” Ingebritson would later comment.
With strong trust from Ingebritson on the mound, the Saints wouldn’t need as much productivity on offense.

The Legends would end up striking first in the game, but not until the bottom of the sixth inning. After a lead-off single, Ingebritson would hit a batter to put runners on first and second with no outs. A single to center would score a run for the Legends and they would lead 1-0.

The Saints would respond back right away. In the top of the seventh inning, Spencer Mossburg (Lee University) would hit a leadoff triple. This would bring Tyler Durna (UC San Diego) up to the plate with zero outs. Durna would hit a single to center field that would score Mossburg and tie the game. Durna would steal second base and move over to third on a chopper to the second baseman by Brennan McKenzie (Cal Poly Pomona). Blake Burton (University of Washington) would hit a sacrifice fly to left field and Durna would score to make it 2-1 Saints.

“When Spencer hits two triples it makes my job to bring him in easier,” Durna would say about having his two RBIs on the day bring in Mossburg.

The Legends wouldn’t be able to respond to the Saints taking the lead. The Saints would look to add an insurance run onto their lead in the top of the ninth inning. Mossburg would hit his second triple, this time with one out. Durna would capitalize and bring him home with a sacrifice fly to left field. The Saints would lead 3-1 now, which would be the result.

“We will be ready to go out there and play ball tomorrow,” Mossburg would comment on playing the Legends again tomorrow and using this game as momentum.

Momentum would be what rallied the Saints at home the next day as they returned to Brookside Park to score 14 runs in the contest between the two, including a 10-run second inning. The impressive run scoring would belong to both teams, as a total of 22 runs were scored.

The Saints would Start CCL All-Star, Gunnar Friend (Avila University), but shortly after the Legends Score two early runs, he would be relieved by Dellan Raish (Arizona State University). The Legends would tack on three more runs and leave the inning with a 5-0 lead.

The Saints would get three back in the bottom of the inning, after a Tyler Durna (UC San Diego) triple to bring home Gabe Chavez (UC San Bernardino). Durna would later score on a SAC single by Spencer Mossburg (Lee University). Additionally, newcomer Brennan Mackenzie would hit a deep double and later steal third base, and fellow Newcomer Brendan Shearer would bring him home to cut the lead by two for the Saints.

After a 1-2-3 inning for Raish, Saints would show off their high-powered offense accumulating 10 runs in next inning. Alex Briggs (LIU Brooklyn) would start the inning with a lead off-triple, making it easy for Mitch Kerner (Emory University) to bring home on a single to cut the lead to one.

Kerner would later comment, ‘We did a good job on coming back from an early deficit and we were able to fight back’

The Saints were not finished as Chavez and Durna were both able to get on base for a Mackenzie bases-clearing triple to give the Saints the lead, 7-5

During the post-game, Mackenzie commented ‘That everyone was seeing the ball very well today and that helped as we were able to mount the comeback early on’

Infielders Brendan Shearer and Corey Harrell would add three more runs for the Saints, Shearer would bring home Mackenzie on a double and Harrell with a two-run homerun to bring the lead 10-5 Saints.

Raish would pitch steadily for the next 3 innings, allowing zero runs and striking out three. Corbin Lamb would come into pitch and allow a three-run homerun to the Legends, making the score 10-8, as the games high scoring affair would continue.

Chavez would answer with a two RBI double of his own the next inning, giving him his third of the day.

Chavez would share his excitement on offense production after the game, saying ‘We were seeing the fastball easy early in the game, and we did a good job on smoking the ball in the gaps and continuing it for the rest of the game’

The Saints would add two more runs late in the game to give them a six-run lead heading into the ninth, making a non-close situation for Brett Weisberg (Pierce College), who would shut down the order in the ninth for the Saints.

Saints were clicking on all cylinders on Saturday, as they hope to bring that energy into Tuesdays game against the Santa Barbara Foresters. The game will be played at Brookside Park and starting at 6:05 p.m.