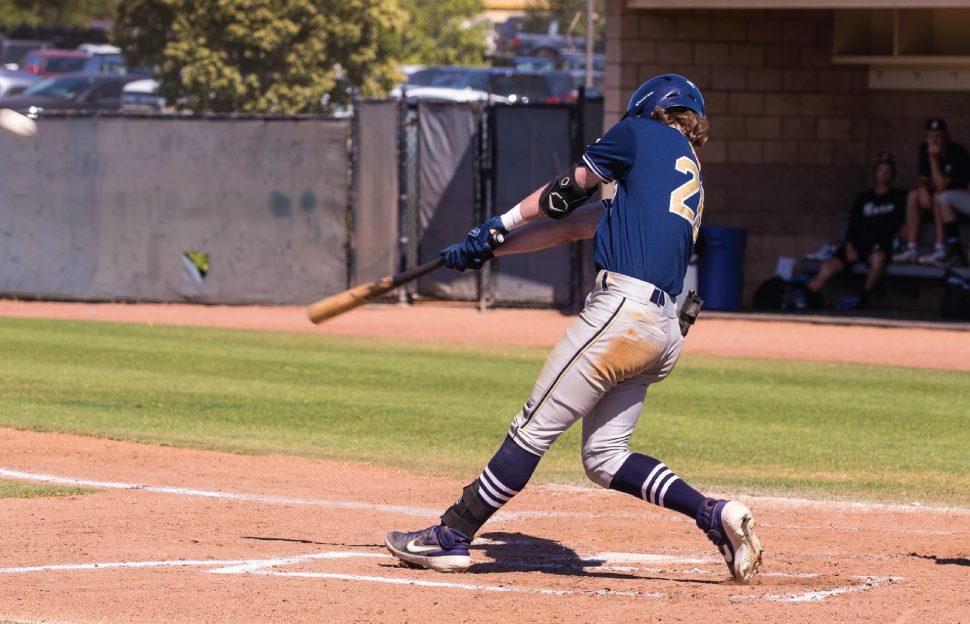 THOUSAND OAKS, CA — The Saints rallied yet again in the ninth inning, but fell short to the Conejo Oaks at George “Sparky” Anderson Field at Cal Lutheran University in Thousand Oaks.

Tristan Garnett (Cal State Dominguez Hills) started on the mound, striking out the side in the bottom of the first inning. Garnett had a total of six strikeouts through four innings, allowing two walks and two runs.

The Saints jumped out to an early lead in the top of the second inning, as Jag Burden (UC Berkeley) roped a base hit to right field. Cooper Elliot (Wichita State) slapped an RBI double to right-center field, skirting past the diving Oaks center fielder to put the Saints up 1-0.

Elliot stole third base, and Jonah Sebring (Johnson County CC) slammed a base-hit into left field for an RBI double to make it a 2-0 Saints lead.

The Oaks would answer right back, and post one run in the bottom of the third inning to make it 2-1.

The bottom of the fourth inning opened up with back-to-back base hits for the Oaks, as an RBI single tied the game 2-2.

Garnett walked the lead-off batter in the bottom of the fifth inning, followed by a controversial hit-by-pitch on a check swing. Kyle Sonduck (Texas San Antonio) came in for relief, and the next batter bunted down the third base line. Two defensive miscues by the Saints gave the Oaks a 4-2 lead.

Sonduck quickly settled down after that, with back-to-back strikeouts and a groundout to end the inning. He had four total strikeouts in three innings, allowing just one hit.

Sebring came to bat in the top of the eighth inning and hit a first pitch pop-up, but the ball was dropped by the second baseman. Thanks to an error by the Oaks, Sebring ended up with an inside the park home run.

“It was a first pitch strike that was up and out, and I was trying to get on time but I was a little late, and it was a blooper in no man’s land towards second base,” Sebring said. “I slid into second, and the throw was wild and there was nobody there, so right after I saw the throw I was just going to go home.”

The Oaks handed the Saints their fourth straight loss, but Sebring is confident in his teammates that they can bounce back offensively.

“We need to be fundamentally sound each game, and we have the talent, and I think it comes down to us playing with energy every single inning, because when we’re hot, we’re really hot, and we can swing and put good at-bats together.”

The Saints are looking for their first win in four games, as they take on the Orange County Riptide on Sunday at Jackie Robinson Memorial Park. First pitch is at 6:05 pm PST. Tune-in to the Saints Youtube and social media channels for game updates.