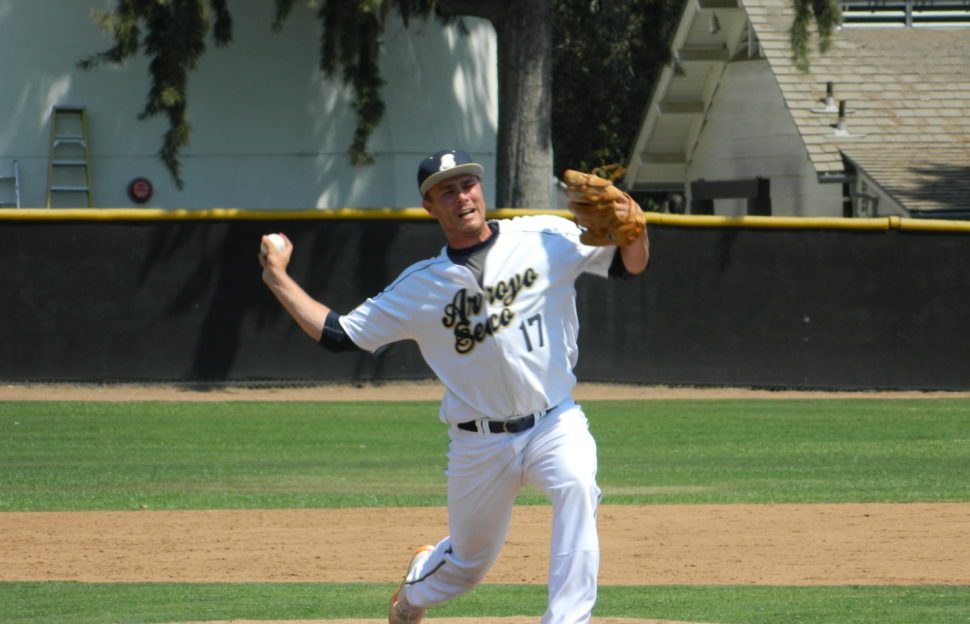 In a game with implications across the CCL, with shifting spots across the southern division over the course of the week, Saints were looking to extend their weekly record to 4-2. Although, the Foresters had different plans as they did not hold back in a 14-3 lopsided affair over the Saints.

The Saints were heading to Santa Barbara to face the Foresters for the second time this week, after losing the first outing, 2-1, in a pitching duel that would be short-lasted in this matchup with a total of 17 runs scored between the two ball clubs.

Despite the 14-3 loss, Saints were on the scoreboard early with the first run of the ballgame with a Blake Burton (University of Washington) RBI single to bring home Gabe Chavez (University of Calif, San Bernadino). The Saints would lead the contest 1-0 after the top of the first, with the Foresters bats, who were prepared to test the Saints pitching heavily.

On the mound for the Saints would be Tommy Costello (University of Washington), Costello would pitch until the third inning where he would let up four runs in the first two innings. There would be two back to back triples that would leave the Saints trailing 4-1 in the bottom of the second.

Corbin Lamb (Lee University) would follow Costello in the third inning, where he would receive the same fortune, giving the Foresters hitters an early bases loaded situation which would clear the bases after a double to advance the lead by six runs.

The inning would not be over for Lamb, where two more runs would score on an error to first base. The Saints would surrender a 5-run inning in the third, making the score 9-1.

A 14-1 lead by the Foresters would be the score at the bottom of the sixth inning would, a couple of insurance runs in the later innings would result in a 14-3 defeat.

Quint Robinson (University of Tennessee), a player who regularly throws for the Saints saw some action in a different part of the field yesterday, second base.

Robinson, shared his strong reaction after the game, on the opportunity to play in the infield, saying “A different way of looking at the game, it’s been 4 years since I saw a live AB like that, I was trying to think like a pitcher and expect what I would do in these situations”

Robinson also scored the Saints last run of the evening.

On the team’s second straight loss to the Foresters, Robinson finished by saying “I told my teammates after the game that we just have the flush that one, they{Foresters} being a very good team, we will have to bounce back and forget about the loss.”

As the All-star game approaches, Blake Burton who will participate in July 12ths talent spectacle had some uplifting comments about the game afterward, loosening the blow of the loss, but focusing on what’s to come.

Burton commented “Getting some rest, after playing six games in a row, mentally preparing myself for the game, spend some time with the family and get myself ready to compete.”

The All-Star game will be played at MLB Youth Academy in Compton, California on July 12th at 7 p.m.

The Saints, on the other hand, will head into the break with a record of 12-10 in the CCL, holding the second spot in the South division.

Saints will resume playing a day after the All-Star game in Irvine, CA against the Orange Country Riptide, who currently ranks first in the South division. The game will start at 4:35 p.m.

Texarkana Tough: Saints’ Jackson Cobb Back to Work After Two Years of Setbacks

It’s GameDay‼️The Saints are back at home to

Saints are looking to grab the lead coming up. 0-0

All smiles for a Saturday Saints Game 😃 #CCLBa

John Chomko threw fire for the Saints tonight. He

#SaturdaysAreForTheSaints The Saints and Forester

@josh_cowden knocked a ball out of the park to add

The Saints pull away from the Oaks, putting two ru

@tommysteier the starting pitcher for the Saints i

After a late-game push to come within one run, the