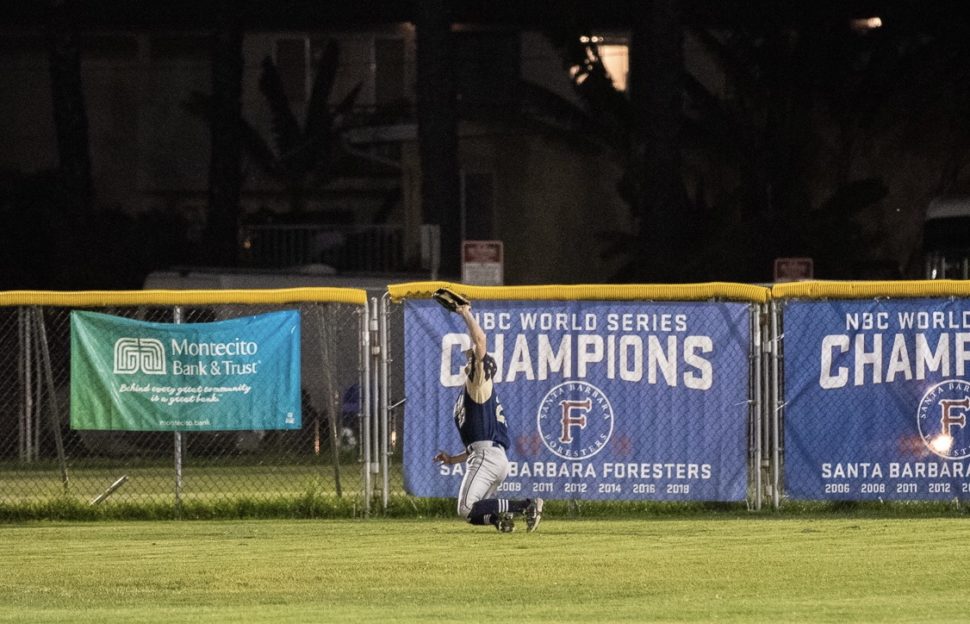 SANTA BARBARA, CA — Something about the Santa Barbara Foresters brings out the best in the Arroyo Seco Saints. Maybe it's the palm trees in center or the beach down the street from the field. Or maybe something else.

“We’re both good teams, and we’re both up there (in the standings)," outfielder Josh Cowden (BYU) mentioned. "We also talk a lot, you know, chirp on both sides. I think that's why it’s fun, but it’s also like, you know, we’re just playing baseball.”

Whatever the reason, the Saints are 3-0 against the defending CCL Champions.

Coming off an exhilarating, 8-6 walk-off victory against the Foresters on July 8, the Saints solidified their position at the top of the standings in the CCL South with a 6-5 win on Friday night.

Tristan Garnett (Cal State Dominguez Hills) set the tone early in this one, shutting out Santa Barbara through the first four innings. He had some of his best stuff all season, striking out five and only giving up two hits through four innings.

The middle of the Saints batting order jumped on Foresters starter Justin Eckhardt (Texas). Josh Cowden and Peyton Lewis (Texas State) had two hits each off of Eckhardt, with Cowden knocking in Jake McMurray (Oral Roberts) on an RBI double in the fourth to make it 2-0.

The fifth inning was a completely different story for Garnett. He had trouble finding the zone, walking the first two batters. Pitching to third baseman Dylan Campbell (Texas), Garnett left a fastball up that Campbell knocked over the short fence in left field for a three-run homer, giving the Foresters a 3-2 lead. Santa Barbara added another run to go up by two heading to the sixth.

That lead didn't last long. The Saints came right back with two of their own, scoring on a Lewis sac-fly and a Brandon Bohning (CSU Northridge) RBI single.

Tied at four in the seventh, Jackson Cobb (Crowder College) worked a lead-off walk, setting the stage for Connor Bradshaw (Pepperdine). Death and taxes, they say. Bradshaw struck yet again, launching a rocket that sailed over the right-center field fence for a two-run bomb, putting the Saints ahead for good.

The bullpen shined again for Arroyo Seco, continuing their dominant season. It was the boys from UT San Antonio who shut down the Foresters for the last 4.2 innings. John Chomko and Kyle Sonduck were electric, combining to strikeout eight, giving up just one run.

That one run, however, made this game very interesting in the ninth inning. A lead-off home run by Dylan Campbell (Texas) cut the Foresters deficit to one and brought life back to the quieted bench.

Sonduck bared down and struck out the next two, but the Foresters got the next two runners on., giving Steven Zobac (Cal Berkeley) a chance to be the hero. He put a charge in a ball, deep to center field that sent Cowden on his horse. At the last second, Cowden turned and lunged for the ball, falling to his knees and squeezing it right in the sweet spot of his glove to end it.

“Yeah, I don’t play center field," Cowden said, jokingly. "That was a lot different than playing left or right, but it was fun.”

The Saints will be looking to extend their four-game winning streak tonight as they'll face off against the MLB Academy Barons in Compton at 6 pm PST.