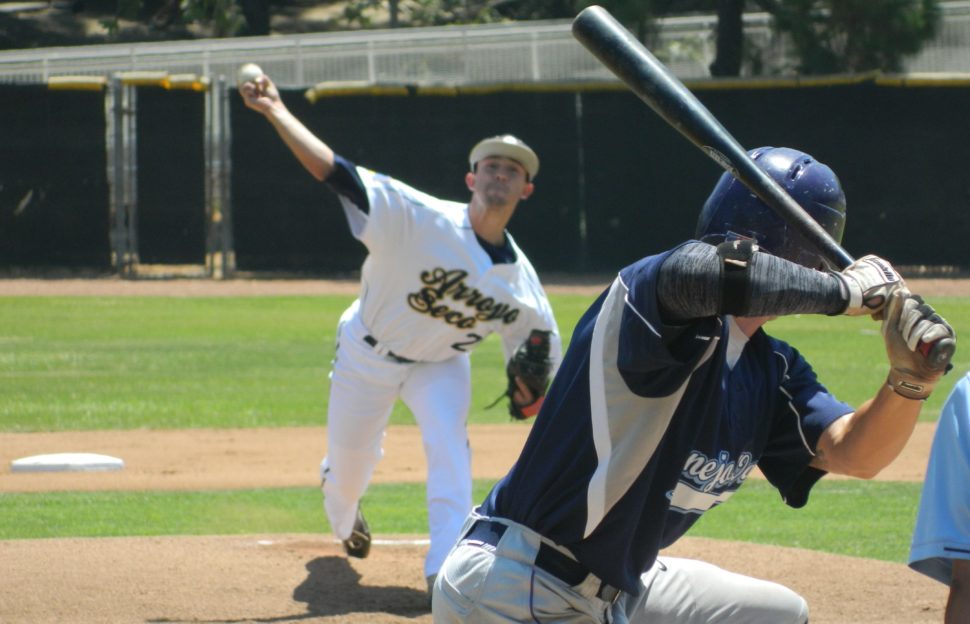 (Pasadena, CA)-For the third meeting between the Saints and Riptide this season, the series was tied at 1-1 with the last outing between the two ending generously in favor of the Riptide.

With the game being played at Brookside park, Saints started out in similar fashion as their previous dual, when starting pitcher, Kyle Merkel (San Diego State) gave up a homerun in the top of the first. The Saints would play stout defense for the next few innings, with a big diving stop by Josh Magee (Faulkner University) at third base and soon to follow would be a Brendan Krob (University of Evansville) solo homerun to even the game at one, Krob also would contribute defensively with throwing out a runner at second.

The game would square up at 2 in the bottom of the fourth, after a Blake Burton (University of Washington) RBI to bring home Gabe Chavez (Calif State University, San Bernadino). This would eventually turn into a one-sided affair with the OC bats became too much for the Saints to contain.

The last three innings would be suffering for the Saints, as they would give up seven more runs to the Riptide, Pitchers Gabe Golob (New York University), Corbin Lamb (Lee University), and Josh Little (North Carolina Central University) would round out the game for the Saints.

Barring the 9-2 loss the Saints and second straight to the inner-division opponents, Catcher Brendon Krob mentioned how some players are still getting used to the heavy weekly schedule, saying “ I think are bodies are all a little fatigued, an off day will put us right back on track” Second Baseman, Gabe Chavez agreed, saying “ we need to keep playing catch, their pitchers found our weaknesses and put the ball in the right spot to shut us down, for next game we have to get after it and be more aggressive”

The two teams resumed play on Monday, June 19 at 4:35, after a rest day for both teams, they would return to Concordia University in Irvine.

The Arroyo Seco Saints relied on great starting pitching and offense to hold off the Orange County Riptide from sweeping the three-game series. The Saints combined for a total of 12 hits, while starting pitcher Zach Phillips (Grayson College) pitched an impressive seven innings on the road game against the Riptide.

The Saints got aggressive early in the first inning of the contest when Bryan Smith (Occidental College) led off with a double to right field and then stole third on a ball that got passed the catcher. Spencer Mossburg (Lee University) brought Smith home with a grounder to shortstop. The Saints would have the early lead of 1-0.

The Saints gave Zach Phillips (Grayson College) the start, his first of the season. After a leadoff single by Joey Parente, he would pick him off at first and answer to the next two batters with a strikeout and groundout to end the inning.

Phillips would give up a run in the 2nd inning, after he hit the first batter who would go on to score after a single and overthrow from the right fielder Greg White (North Carolina A&T State University). Phillips would remain strong on the mound by not allowing another hit or run through his next 4 innings of work.

The Saints would respond to the Riptide tying the game by scoring three runs in the top of the 3rd inning. After a pair of singles by Bryan Smith and Gabe Chavez (CSU San Bernardino), Spencer Mossburg would hit a double to bring both Smith home. Blake Burton (University of Washington) would hit a sacrifice fly to right field to score Chavez extending the Saints lead 3-1. Derek Gibree (St. Leo University) would hit an RBI single to left field which would score Mossburg extending the lead to 4-1.

The battle for first in the CCL south division would turn into a pitching duel until the 9th inning. Phillips would record 7 of his 8 strikeouts during this time, allowing one hit and only two base runners.

The Saints would score in the 7th inning, when Smith would lead things off with a single and get brought in by Mossburg on his single to center for his third RBI of the day.
Gunnar Friend (Avila University) would come in to relieve Phillips in the 8th inning. Friend would allow a single and a walk, but would escape the inning without giving up any runs, continuing the lights out pitching from the Saints.

Friend would start the bottom of the ninth inning on the mound until the Riptide started a two-out rally where the Saints would commit two errors. Errors came on throws to first base on groundouts from the Riptide’s Pulcheon and Uhl allowing two runners on the corners. Friend would give up an RBI double to Beck that would cut the lead to 5-2, with runners still on 1st and 3rd.

The Saints would turn to the bullpen and bring in Josh Walker (Butler University) in hopes of closing out the game. Butler would give up two RBI singles to Shaw and Phillip that would help the Riptide cut the deficit to 5-4. Walker would close out the game with a grounder by Parente.

After the game, Phillips commented on his lights out pitching performance, “On the mound I was able to control my fastball low and away a lot. So, once I figured out I could blow my fastball by them I started going to some off speed just to throw them off.”

Phillips would earn the award of Player of the Game after registering 8 strikeouts, 3 hits, and 1 earned run in 7 innings pitched.
Mossburg would comment on what was going through his mind while in left field for that final half inning in which the Riptide would try to rally back, “was just hoping we could bear down and get that last out.”

Smith would be the runner that scored on each of Mossburg’s RBIs. “Bryan was on base all the time today. So, if he gets to third with less than two outs it makes it pretty easy on me, I just have to put the ball in play and he scores.,” Mossburg said.

“Just get on base and get in scoring position and somebody would get me in, it just happened to be Spence today,” Smith said when talking about Mossburg batting him in each time.
The Saints would come out on top 5-4 in a victory on the road against the Orange County Riptide, taking the one game lead in the South division. The Saints hope to keep the momentum going for this next week of games.