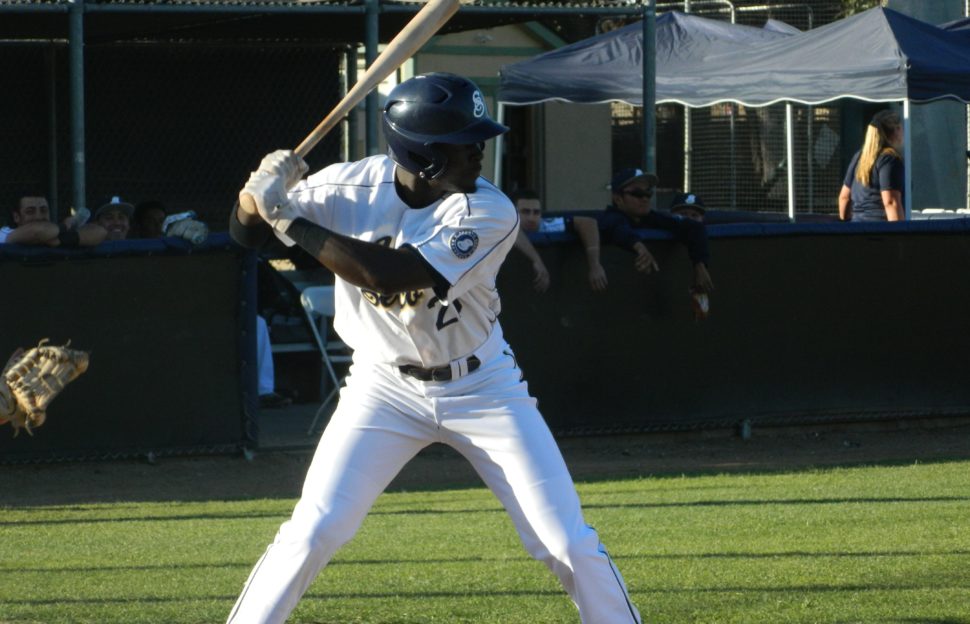 In a double header Saturday against the MLB Barons at MLB Youth Academy in Compton, there was plenty of excitement for the two-game series that totaled nearly 30 runs in this divisional matchup. With the first game that had the Saints leading early on, impressive stat lines came from the pitchers and hitters, as they were dialed in from the start against the Barons.

In the first game between the two, with the help from Blake Burton (University of Washington) and Dustin Krob (University of Dayton), Saints were leading the way 3-0 early on. Blake managed a RBI single with the bases loaded in the first, and Krob powered home two runs starting with Mitch Kerner (Emory University) followed by Greg White (North Carolina A&T State University).
Krob, who was one of two Saints players to play in all 18 innings Saturday, commented on his four RBI and two triple day after the game.

‘Learning from the past mistakes at third base and bringing them into this game, but also making routine plays and getting into a good groove helped today’

Krob displayed not only good baserunning with two triples, but also made a couple key defensive stops to get the Saints out of tough situations over the course of the day.

Saints played consistently for the remainder of the game, they did a great job of getting on base and giving their power hitters the opportunities to make clutch hits.

Blake Burton had two RBI’s in this contest (three on the day), and newcomer for the Saints, Tyler Durna (University of San Diego), aside from his immediate impact at first base, hit a three-run homer in the top of the fourth to make the game 8-0 Saints.

Durna commented on the offensive impact for the team after the game.

“Working at bats, winning pitches, helping the pitcher was working for us, anytime you can go to the bullpen faster, the better the game usually ends up for you”
Durna contributed one homerun and four RBI’S in Saturday’s doubleheader.

Starting Pitcher for the Saints, Tommy Costello (University of Washington) put in five innings of work, with one earned run and four strikeouts. Of the next two pitchers, Brett Weisberg (Pierce College) and Quint Robinson (University of Tennessee) played the remaining four innings, with three additional earned runs and two strikeouts between them.

The Saints would go onto defeat the MLB Barons 11-4 In the first matchup of the afternoon.

The Saints carried momentum into the second game of the afternoon, after Blake Burton brought in a run after a Tyler Durna double to start the game. The Barons would soon answer with a first batter, first swing homerun, courtesy of their leadoff hitter. On the mound for the Saints, Kyle Merkel (California), who would pitch three innings for the Saints. The Barons and Saints were deadlock at one following the first.

Saints, once again started out early with a 4-1 lead in the fourth inning after a Josh Magee (Faulkner) and Dustin Krob single(s) brought in three runs collectively.
After Merkel was jammed with a bases-loaded situation late in the fourth inning, Gunnar Friend (Avila University) was sent into replace him, who escaped the inning with one run given up. The score was now 4-2 Saints.

In the next inning for the Barons, they took the lead and scored three runs off aggressive hitting and recorded two RBI singles off back to back hits to centerfield. A Sac single would follow to make the game 5-4 Barons.

Friend would pitch the next inning for the Saints, until being replaced by Tim Turner (George Mason University) in the bottom of the seventh. Turner would be short lasted after letting up 3 runs in the inning, giving the Barons an 8-4 lead.

The two remaining pitchers for the Saints were Josh Little (North Carolina Central University) and Corbin Lamb (Lee University), who would close out the game for the Saints. Saints offense would have a hard time getting going later in the game as well, recoding 0 runs in the last six innings of work.

The Saints would trail and be defeated by the Barons in the second game of the doubleheader, 11-4.

During the postgame, On the momentum being carried into the next homestand for the Saints, which starts in the upcoming week, Dustin Krob was enthusiastic about the opportunity to return home, saying ‘We will come out with a lot of energy, we will sure come out hot and returning to our stadium will be good in preparation for each game”

The Saints have one more away game before returning home to Jackie Robinson Memorial Field, and that takes place on Tuesday, June 27th, against the Long Beach Legends at 5 p.m.