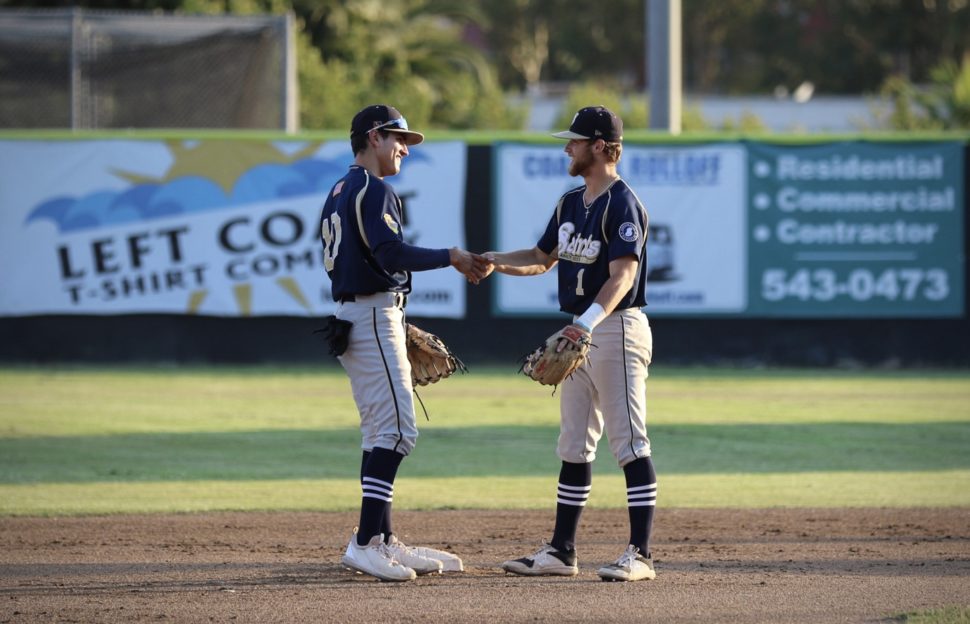 SAN LUIS OBISPO, CA - Back up north for the first time since their July 3rd loss to the Blues, the Saints were able to redeem themselves and come away with the 5-3 victory in front of another large crowd at Sinsheimer Park.

The crowd helped bring the energy to Friday's game. "This is really the first time in a little over a year since I've played in front of any kind of fans," said Saints reliever Dom DiRado (Binghamton). "So it feels good, feels good to be back out there."

Coming off of a 10-0 romp of the Conejo Oaks last night, the Saints were able to build on that momentum and win their seventh league game in a row, giving them a two game lead over the Santa Barbara Foresters for first place in the division.

Tommy Steier (Creighton) had a shaky start to this one, giving up two runs in the first and throwing 31 pitches in the process, but he did well to limit the damage. With the bases loaded and two down, Steier slung a wicked slider that Grant Burton (Stanford) couldn't handle, striking him out and ending the threat.

That was all the Blues would get off of Steier, as he finished three innings, striking out three.

The bats got hot in the third inning. The two Saints hitting above .380 in conference play, Connor Bradshaw (Pepperdine) and Drew Cowley (Cal Poly Pomona), both collected RBI knocks to tie up the game. Cowley's hit came with two outs, as he ripped a double to deep right field that scored Jackson Cobb (Crowder College) from third.

John Chomko (UT San Antonio) came in to relieve Steier, and continued to baffle hitters out of the bullpen. He hurled two shutout innings with one strikeout, earning the win.

This one would stay tied until the top of the sixth inning, where the Saints took advantage of a couple of Blues miscues. After a errant pick-off throw allowed Josh Cowden (BYU) to take second, Jag Burden (Cal Berkeley) hit a high chopper to first that kicked off the glove of first baseman TJ Clarkson (Utah) and into shallow right field. Cowden was on his horse, racing around third and scoring the go-ahead run to give the Saints a 3-2 lead.

DiRado relieved Chomko in the sixth, and was lights out again, pitching three strong innings and giving up just one run. These two guys have helped make the Saints bullpen one of the best in the CCL.

"Our energy is always there, I mean you can hear us from the first pitch of the game to the last," DiRado said about the bullpen. "Energy is always so high and we're always ready to hear out number get called and go in there and do the best we can."

Like all great teams do, the Saints added some key insurance runs late in the game. They put together a long rally in the eighth, scoring twice on wild pitches by Blues relievers. Cowden and Bo Willis (Weatherford) were the beneficiaries, scampering home to give the Saints a 5-2 lead.

The Blues would add one in the eighth, but Trevor Kniskern (Pepperdine) came in and shut the door on any Blues comeback in the ninth, giving the Saints the 5-3 win.

The Saints will be right back here in San Luis Obispo on Sunday to face the Blues in an afternoon game, with first pitch scheduled for 1pm PST.

Player of the Game:

Highlights from Saints 5-3 Win against the Blues