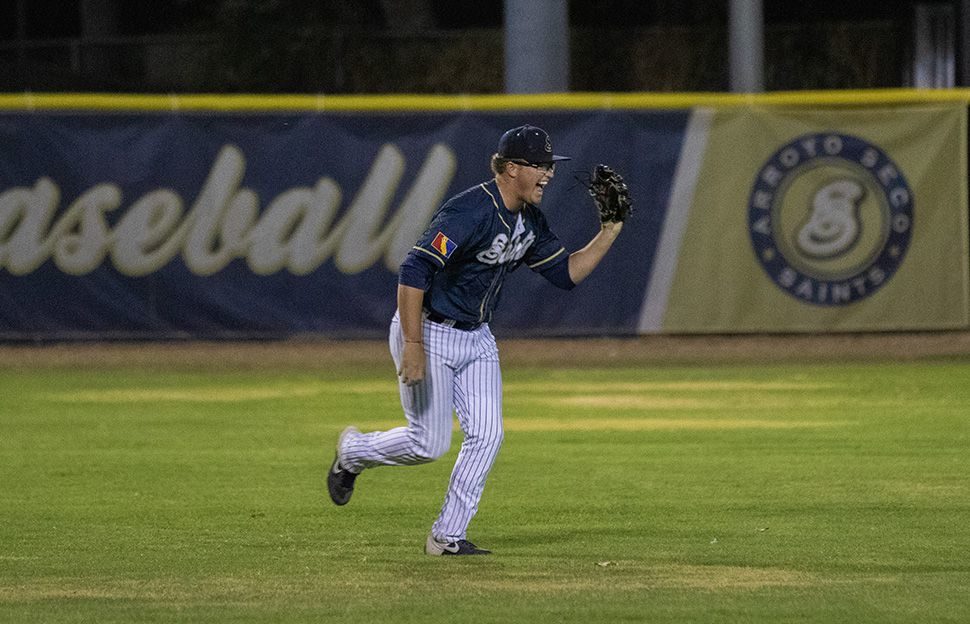 PASADENA, CA – The Saints got back into the win column in style on Sunday, posting 12 runs and shutting down a late comeback attempt from the MLB Academy.

The Barons opened the scoring in the first with runs. However, Arroyo Seco responded in the bottom of the frame when Kyson Donahue (Hawaii) sent a two-run shot over the center-field wall.

A second inning double from Jacob Sanchez (Texas – Rio Grande Valley) drove in Jack Walker (Louisiana Tech) and gave the Saints their first lead of the evening. Lights-out pitching from Dom DiRado (Undecided) helped the home team preserve their one-run lead heading into the fourth. The right-hander struck out three Barons while conceding only two hits through 2.0 innings pitched.

Both teams stayed quiet until the eighth when the Barons attempted to claw back into the game. MLB Academy quickly rattled off four unearned runs, narrowing the deficit to two. With the momentum swinging into the visitors’ favor, the Saints needed a spark to help them escape the inning. Enter Jake Porter (BYU), the right-handed closer from Provo, Utah. Despite conceding a single to Neighbors, Porter proved to be just what his squad needed as he retired Boyd, the very next batter, in four pitches for out number three.

Arroyo Seco added to their lead in the eighth frame thanks to runs scored by Walker, Sanchez, Blessinger and Rogers. Up 12-6 in the ninth, Porter picked up his second strikeout of the game before being replaced by Logan Deskin (Regis). However, after the mound visit, Porter didn’t make the usual trip back to the bullpen. Instead, he excitedly trotted to join Blessinger and Jared Bujanda (CSU Bakersfield) in the outfield, as he would serve as the team’s left fielder for the remainder of the game.

The Saints moved closer to a victory when Jaelen Williams (Jackson State) smacked a ground ball right to Deskin, who made the easy throw to first. The next batter, Crixtian Taveras (Compton CC), sent a fly ball into left field that sailed into the glove of none other than Jake Porter, snapping the Saints’ five-game losing streak in storybook fashion.

When asked about his game-winning snag, Porter said that he was ready for anything because the ball was destined to come his way.

“It was something that I prayed for, because I hadn’t played outfield since high school… And I knew the ball was going to me, it has to,” said a beaming Porter. “I saw it the whole way. Everyone was making fun of me, but I made the catch.”

With the win, the Saints finally got the monkey that was five straight losses off their back. Blessinger explained that even during the losing streak, he and his teammates never lost hope and always believed they would come out of the slump.

After having three days off for the CCL Showcase Game, the Saints will look to build off Sunday’s win when they take on the Orange County Riptide on Thursday. First pitch is scheduled for 6:05 p.m. PST at Jackie Robinson Memorial Field. Follow the action on the Saints YouTube and other social media channels.