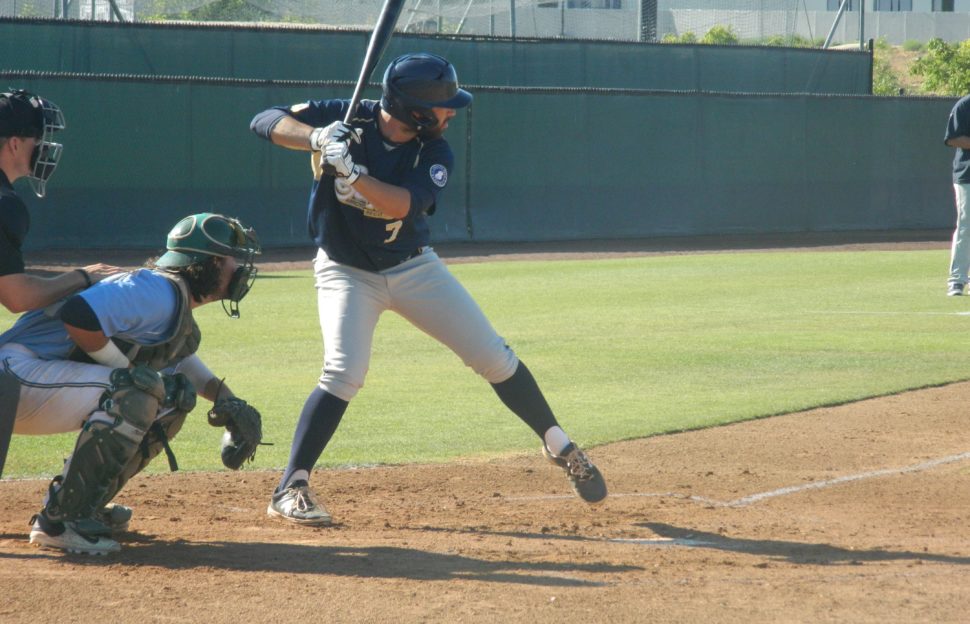 (PASADENA, CA) With 10 runs scored in the Saints win Tuesday against the Ventura Halos, payback was on the horizon against the team that dealt them their first loss last week. A game that started out rocky for the Saints, Dellan Raish (Arizona State University) started the game surrendering one run in the top of the first inning off a deep double to right. Despite the early lead for the Halos, Saints would answer in the bottom of the inning.

Gabriel Chavez (Calif State University, San Bernardino) managed to get on base first for the Saints, with a line drive to right, he would later steal two bases to bring himself to third, where he would ultimately score on a pass ball making the score 1-1.

The top of the second inning resulted in three runs for the Halos. Dellan Raish had a first batter strikeout, and would let up 3 baserunners, which resulted in a bases-clearing double bringing the score to 4-1. The Halos would leave two on late in the inning, after Raish’s final strikeout of the inning, and game, giving a safe lead for the Halos heading into the bottom of the inning. Gunnar Friend (Avila University) would relieve Raish in the top of the third.

The bottom of the third was sparked with a Brett Adams (Scottsdale Community College) double after a quick two outs for the Saints. The beat out grounder by Greg White (North Carolina A&T State University) was overthrown by the Halos shortstop to bring home Adams and advance White to second. With a runner on second, Derek Gibree (St. Leo’s University) chopped one down the third base line to bring home a speedy Greg White. With the score now 4-3, Josh Magee (Faulkner University) gets the ball down the third base line to bring Gibree to third and himself to first. The inning ended with Gibree caught in a pickle between the catcher and third baseman.

Friend strikes out the side in the top of the fourth to keep the game at 4-3. The bottom of the inning for the Saints was where the comeback was mounted. The inning started out with a Scottie Graham (Loyola Marymount University) single, as well as a Dustin Krob (Dayton) double to bring runners into scoring position. Gabriel Chavez would bring home Graham on a single through short and third, tying the ballgame.

Chavez would steal second and Blake Burton (University of Washington) would walk creating a bases-loaded opportunity for Spencer Mossburg (Lee University). Mossburg would use his speed to beat out a diving a shortstop, bringing home Krob from third gaining the lead for the Saints. Next up, Brett Adams, delivering a shot to left field to build upon the lead with a bases-clearing triple, making the score 8-4. A pitching change for the Halos still favored the Saints offense, as they kept rolling bringing in Adams from third after a Gibree single. The Saints build on their lead by adding six runs in the bottom of the fourth inning, making the score 9-4.

In an interview with Derek Gibree and Brett Adams following the game, they mentioned how great bats and great teamwork created the momentum for the Saints in the impressive fourth inning “We are all starting to come together as a team, we fell behind early, and were able to bounce back as a team” says Gibree.

Adams added “When the person in front of you gets a hit, it gives you the confidence to go up there and get a hit as well, which drove our momentum for each at-bat”

Friend would let up one run in the top of the fifth, allowing his first homerun to Christian Jones, but would survive the inning to strike out the remaining batters. Blake Burton would reciprocate that by adding a solo homerun of his own next up at bat, making the score 10-5 Saints. Zack Phillips (Grayson University) would pitch the remainder of the game for the Saints, recording six strikeouts in the four innings and securing the lead and win for the Saints and improving their record to 4-2.

Head Coach, Anthony Chevrier also commented on the teamwork “Today was a big game for the organization, we have had all different types of games and today was a group effort “We were able to punch back after being down in the first inning, and we were able to communicate that to our guys just to stay with it and that’s what they were able to do today”

The Arroyo Seco Saints are on the road for their next game on Wednesday, June 14, against the SoCal Catch at 5 p.m.