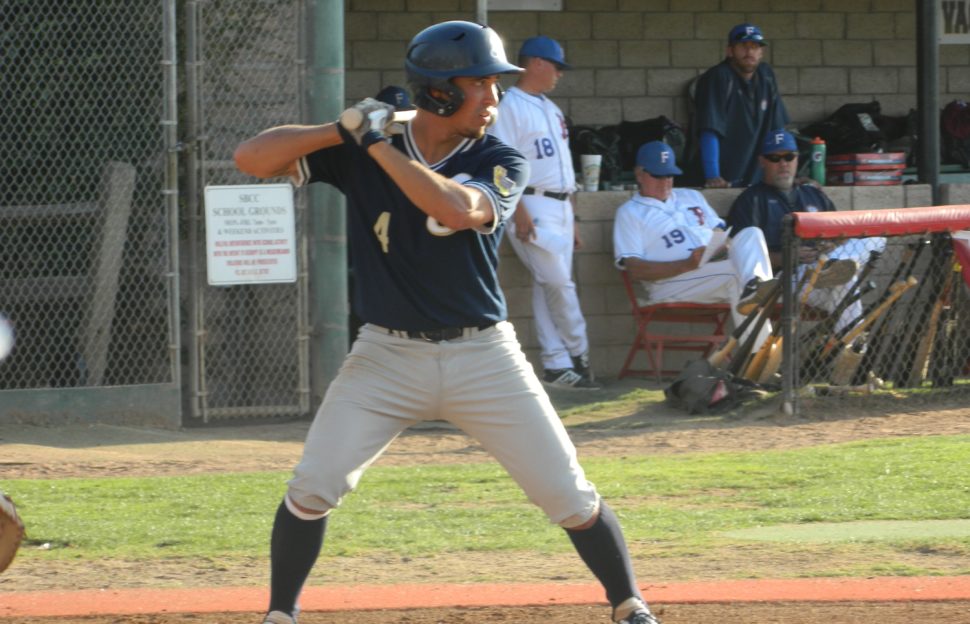 The Arroyo Seco Saints secured a much-needed win on Saturday afternoon against the Conejo Oaks, winning 7-6 at Jackie Robinson Memorial Field. The game came down to one final play in the ninth inning, where the Saints defense was able to keep the Oaks from tying the game and prevent extra innings.

The two teams battled it out in the heat, where temperatures went up to 105 degrees. Just like the heat, the Saints started off the game hot, scoring three runs in the first inning. Both Dustin Krob (University of Dayton) and Gabriel Chavez (CSU San Bernardino) scored off of two consecutive passed balls. Then, third baseman Brandon Shearer (Loyola Marymount University) would hit a sacrifice pop fly to bring in Tyler Durna (UC San Diego).

“We were just staying focused on pitches – swinging at the right time and hitting the fast ball,” Chavez said. Chavez went 4-5 at bat with one run and one RBI against the Oaks today.
After this, the Saints would not score again until the sixth inning, but a phenomenal performance by starting pitcher Gordon Ingebritson (Coastal Carolina University) kept the Oaks scoreless through the first five innings. In six innings of play, Ingebritson recorded five strikeouts, and is now second on the team with 21 strikeouts on the season.

The Oaks scored their first run in the sixth due to an error coming from the catcher to third base in an attempt to tag out an Oaks runner trying to steal third. The Saints would score two more runs at the bottom of the sixth to gain a 5-1 lead.

It was in the seventh inning where the Oaks began their comeback, scoring two solo home runs immediately against relieving Saints pitcher, Shamon Moss (Georgetown College).

In the eighth, the Oaks would gather multiple hits which would turn into three runs, giving them their first lead in the game, 6-5. At the bottom of the eighth, a single by Chavez would bring outfielder Bryan Smith (Occidental College) home and Krob to third base. The Oaks tried to throw out Chavez from stealing second, but it was missed, leading to Krob running to home plate, and giving the Saints the lead once again, 7-6.

The Oaks would look to comeback once more in the ninth. With two outs and with D.J. Miller in scoring position at second base, the next Oaks batter would hit a single to center field, which would be caught immediately by Smith. As Miller raced around third towards home for the Oaks last chance, Smith launched the ball to home plate where catcher Mitch Kerner (Emory University) was able to tag out Miller before he touched home, and ending the game for the Saints victory.

“I knew they were going to try and tie it…so I just threw it as hard as I could, gave it everything I had left, and Kerner gave a good tag down for me,” Smith said.

Kerner explained that the entire team stepped up at the end of the game when it mattered most, and even found ways to overcome the heat through mental toughness.

“In big moments, we stepped up and then we closed it out the right way. It was a little exciting, but we got it done. We did a good job and found a way, somehow to overcome the heat,” Kerner said. “It was definitely a factor, but the biggest thing that this game came down to was mental toughness. We fought it out and wanted it just a little bit more.”

Krob also expressed how the team’s unity helped them stay calm and come back in this game.

“It was just a long game. They came back and got the lead, but we always have each other’s backs, picking each other up, and it just worked out in our favor,” Krob said. “No one really tried to do too much. We just tried to put the ball in play, play hard, we found holes and a way to win the game.”

Krob led the Saints offensively on the day, hitting 4-5 at bat, while scoring two runs and an RBI. Normally an infielder, Krob also made a few spectacular defensive plays for the Saints, starting his first game at left field against the Oaks this season.

The Saints are now 12-9 in CCL play and stand at 14-10 overall this season. They are barely trailing the first-place Orange County Riptide in the Southern Division, who are 15-8 in league play. The win over Conejo Oaks helps bring momentum to the Saints as they prepare to take on a tough Santa Barbara Foresters team for the second time within the past three days.

On Friday, the Saints lost to the Foresters in a defensive pitching battle, 2-1. Now the Saints will look for redemption tomorrow in Santa Barbara, who is currently in first place of the Central Division of the CCL with a 19-8 league record.

“It helps gain confidence beating a team like this,” Krob said. “Even though we lost last night, we know we can compete with [Santa Barbara], and I’m sure we’ll find a way to win. We just want
to end a long week with a W.”

Arroyo Seco will play against the Foresters again at 2 p.m. at Pershing Park in Santa Barbara tomorrow.