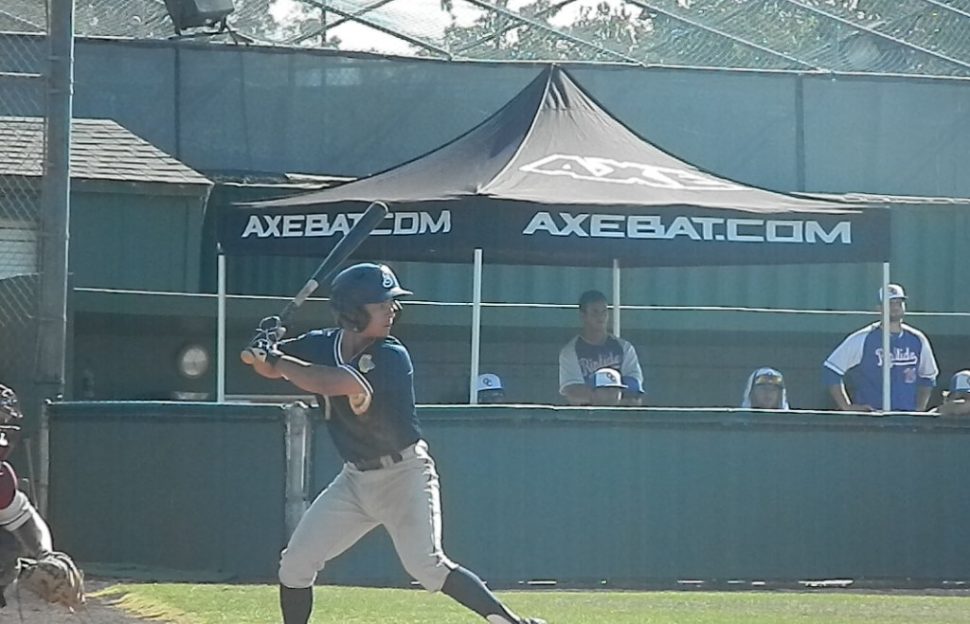 LA MIRADA, Calif. – In their last away game of the season, the Arroyo Seco Saints were able to edge out the SoCal Catch by a score of 11-10 in an intense offensive battle.
The Saints picked up where they left on from Sunday, where they scored 12 runs against Ventura, and came out aggressively at bat. Arroyo Seco would score four runs in the first two innings of play.

In the first, Gabe Chavez (CSU San Bernardino) was able to steal home after an error by the Catch’s pitcher. Soon after, Brennan McKenzie (Cal Poly Pomona) knocked in an RBI-single to bring Blake Burton (University of Washington) home, giving the Saints a 2-0 lead. In the second, Alex Briggs (LIU Brooklyn) would drill a two-RBI double that would bring both Chavez and Andres Kim (University of South Carolina, Upstate) home for a 4-0 lead.

Yet the Catch would rally back, scoring four runs of their own at the bottom of the second to tie the game at four. In the third, the Catch would take their first lead of the game after drilling two solo home runs, making it 6-4. Of the six runs scored by the Catch, three of them would be due to solo home runs – two of which were scored by SoCal’s DH, Omar Ortiz.
The Catch would carry this momentum with them into the fourth, scoring three more runs to take a commanding 9-4 lead.

Although down, the Saints would not be out, and they quickly made their comeback in the fifth. Both Burton and Bryan Smith (Occidental College) would hit RBI-singles to give the Saints two more runs. The biggest play of the night came from Andres Kim, who would hit a three-run homer to tie the game at nine.

Kim, who was brought up onto the Saints from Arroyo Seco’s Sentinels team, has made a huge impact at bat for the Saints over the past week.

“The pitcher just gave me a fastball up, and I got really lucky on that one – got some good barrel on it and it went over the fence,” Kim said. “The three runs came in and I was just happy about it.”

Kim would go 3-4 at bat, scoring three runs, three RBI’s and a home run for the Saints.

After a scoreless sixth inning, the Saints would take back the lead in the seventh, scoring two runs after a pair of throwing errors would bring in Brock Bell (Los Angeles Valley College), and Chavez would bring Kim home with a base hit RBI single.

Chavez was the most consistent player for the Saints on the evening, going 4-4 at bat, with one walk, one RBI and two runs scored.

“Today was a great day,” Chavez said. “I was able to see balls very well today. The righties were just giving me the fastball down the middle, letting me hit it, and I was just taking advantage of the opportunities. I found the holes throughout the field and placed the ball very well today.”

At the bottom of the seventh, the Catch would hit their fourth solo home run of the day, making it an 11-10 game. Thankfully, the Saints defense would not allow the Catch to score again after that, shutting them down in the final two innings of play.

“Our relief pitchers really stepped up today. We had a shaky start [on defense], but other than that, we had a great offensive performance,” Kim said.

Another one of the top performers for the Saints was Burton, who went 2-4 at bat with one RBI and two runs scored. Even though the game was closer than he may have wanted it to be, he expressed that he was still happy with the result and the way that the team performed.

“We did really well today. Although we started off hot, then went down and had to get hot again – it’s baseball,” Burton said. “We’re trying to be consistent from game to game. We just got to keep getting after it and really take this into these last two games to end on a high note.”

After this victory, the Saints have one common goal in mind – to win their final two games and finish the season strong.

“We want to finish the season with two more wins and 20 more runs. That’s the goal,” both Chavez and Burton said.

The Saints will play their final two games of the season this week at Jackie Robinson Memorial Field in Pasadena. They will face off against the SoCal Catch one last time tomorrow at 6:05 p.m. before taking on the San Luis Obispo Blues on Thursday.