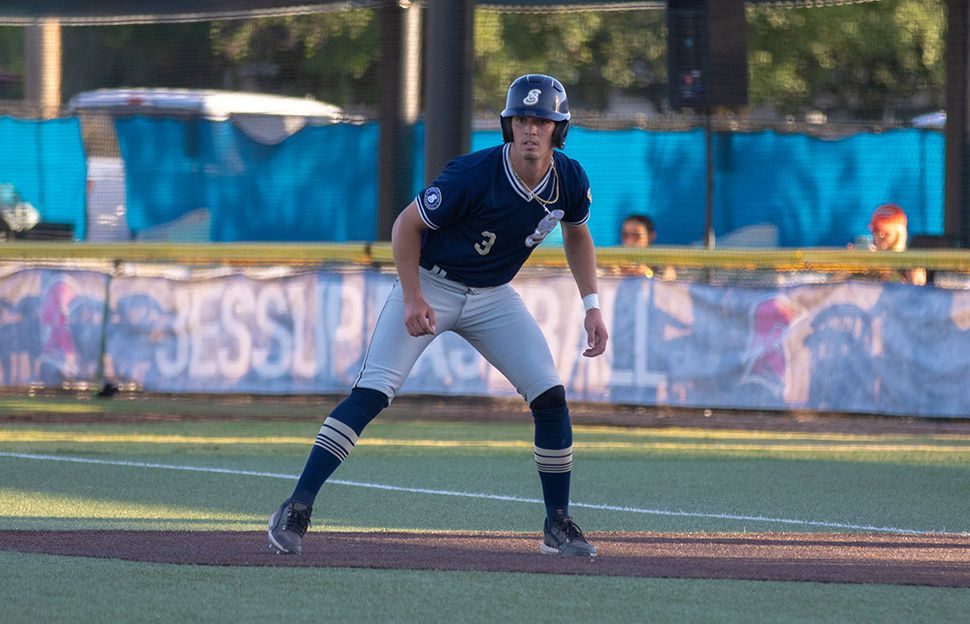 LINCOLN, CA — The Saints came out on the wrong side of a high-scoring affair, dropping the opening game of their Northern California road trip to the Lincoln Potters.

Jordan Rogers (Wichita State) started the scoring in the second frame with an RBI single to put the Saints up 1-0.  However, the Potters had an answer in the third, as they would rattle off four unanswered runs to take a sizable lead.

Manager Aaron Milam attributed the Saints’ fourth-inning surge to players using their teammates’ success to gain confidence in themselves.

“That’s just how the game works, hitting is contagious,” said Milam. “So, you string together a couple [hits], and the next guy’s seeing what the guy before him did…  it’s very contagious.”

The Potters had a big inning of their own, going up 7-6 before doubling their lead in the fifth. The visitors would begin to claw back during the next inning, however. Sitting on third base, Rogers capitalized on a passed ball by catcher Troy Shields (Oklahoma Baptist) to cut the Lincoln lead in half and pick up his second run of the evening.

According to Rogers, the Saints dugout never felt out the game, even when they were down by a couple of runs.  He explained that the he and his teammates always believing in themselves greatly helps their confidence and ability to stay in games.

“The game’s not over until you get three outs in the last inning. If you can scratch away some runs late in the game, it gives us confidence.  Sometimes it doesn’t go your way, but you just have to keep fighting,” said Rogers.

Arroyo Seco’s ‘no quit’ attitude showed in the top of the ninth. Trailing 10-7 and down to their last out, Kyson Donahue slammed his third homer of the season over the right-field wall to make it a two-run deficit. The Saints’ comeback would fall short, as a strikeout by Potters’ closer Ryan Sturgeon (LSU-Shreveport) would seal the victory for Lincoln.

Despite the tough loss, Rogers had an optimistic outlook, saying that he knows this year’s squad is special and it’s extremely important not to dwell on the negatives.

“We’re a really good team. We can hit the ball; we can throw the ball. As long as we’re confident, if we have a bad outing at the plate or mound, we just have to flush it and learn from it,” reflected Rogers.

Milam also drew a lot of positives from Thursday’s slugfest. He viewed the game as a teachable moment for the players, explaining that it’s essential to perform well even after lots of travel.

The Saints will continue their road trip Friday as they travel to Sonoma to face the Stompers for the first time in team history. Opening pitch is scheduled for 6:05 p.m. PST. Follow the action on the Saints’ YouTube and social media channels.