Saints Look To Get Back In The Win Column, Fall 5-3 to SLO Blues 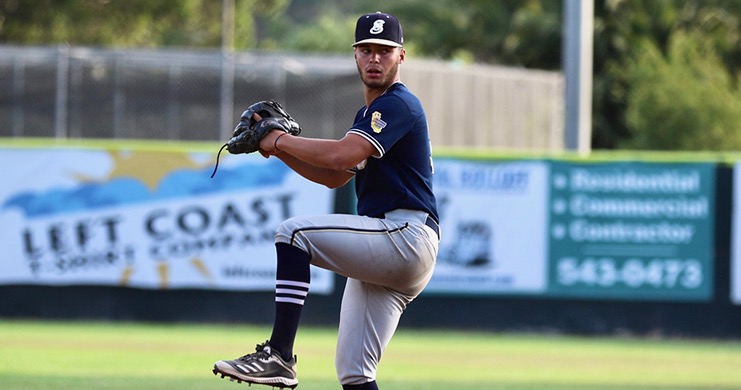 SAN LUIS OBISPO, CA — The Saints endured their fourth-straight league loss in a 5-3 defeat to the San Luis Obispo Blues at Sinsheimer Park.

The Saints worked their way into scoring position early in the first inning with solid base hits from third baseman Drew Cowley (Cal Poly Pomona) and first baseman Jake McMurray (Oral Roberts). Arroyo Seco was unable to push a run across, however. Starting right-handed pitcher Tommy Hannan (Cal Berkeley) headed to the hill, tossing two strikeouts in the opening frame.

In the top of the second inning, left fielder Tommy Castillo (Long Beach State) would get on base and steal second moments later. Looking to bounce back from the Blues' early two-run push, second baseman Jackson Cobb (Crowder) cranked an RBI single to center field to bring Castillo home for the Saints' first run of the game.

Cowley stepped to the plate in the top of the third and crushed a solo home run to right-center to tie the game for the Saints, 2-2.

“I was just looking for a good pitch to hit and was lucky enough to get a fastball and get a swing on it,” Cowley said.

The Blues answered back with two more runs of their own in the bottom of the fourth to regain the lead over the Saints, 4-2.

A sacrifice bunt from designated hitter Jag Burden (Cal Berkeley) sent Castillo to second, putting the Saints back in scoring position. Shortstop Brandon Bohning (Cal State Northridge) followed suit with another sac bunt to put Castillo on third with two outs. Cobb stepped to the plate produced his second hit and second RBI of the game to put the Saints back in the game, 4-3.

Sonduck threw six strikeouts in the first 4.2 innings pitched, two of which came in the bottom of the sixth to keep the Blues off the board for their second inning in a row.

“...The only thing I was focused on was getting ahead of every batter, taking it one pitch at a time, just trying to not give them anything too good,” Sonduck said.

A solo homer by the Blues spoiled the Saints' comeback and gave the Blues an insurance run to put them two runs ahead entering the top of the eighth.

“The home run, I wish I could have that pitch back,” Sonduck said. “But most of the pitches, I executed today, so I’m happy with that.”

Sonduck ended the night with eight strikeouts in 6.2 innings pitched, slowing the Blues’ offense and giving the Saints every chance he could. In the end, the Blues were too much to overcome, and the Saints fell, 5-3.

The Saints will need to win two of their next four games in order to make the CCL playoffs which will take place August 4-6 in Lincoln, Calif.

“When you are gassed, and the tank is empty, the only thing you have left to play for is the guy standing next to you,” said head coach Aaron Milam. “The guy playing Mafia with you on the bus, the guy you are sharing a room with back at the apartments, the guy who shows up every day and comes out of the dugout and tells you're the best baseball player he’s ever seen. That is what you have left to play for in the last week and a half.”

The Saints will head back to Jackie Robinson Memorial Field to host their final home game of the season against the MLB Academy Barons, with the first pitch scheduled for 6:05 p.m. PST. Catch the action on the Saints YouTube channel and social media platforms.

Highlights From Saints 5-3 Loss Against the SLO Blues