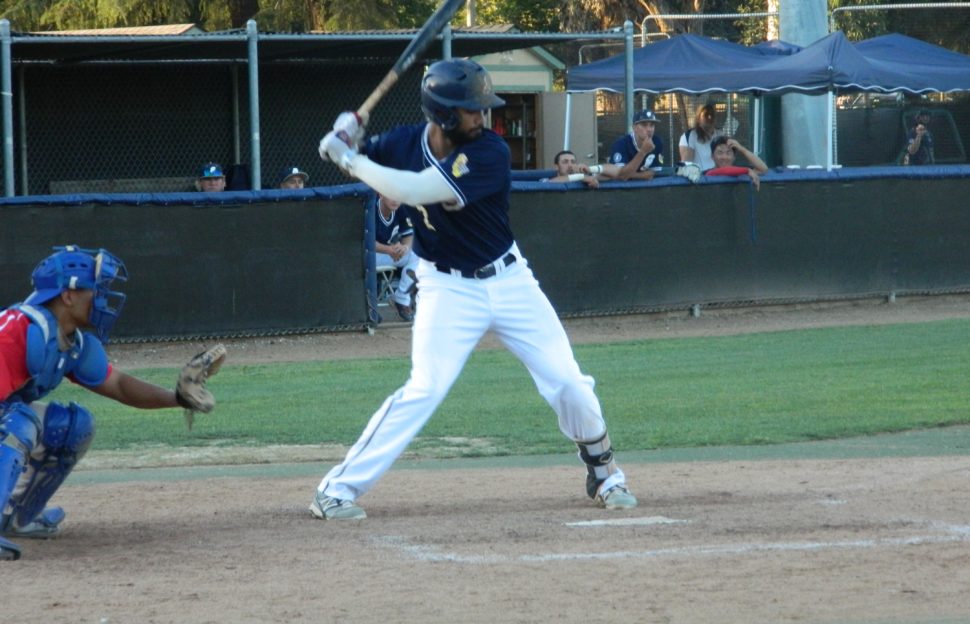 PASADENA, Calif. – The Arroyo Seco Saints did not have a strong start to their week as the team found themselves down and behind for the majority of the game against the Long Beach Legends on Tuesday. The Saints would fall to the Legends by a score of 7-4 after struggling at bat and on the mound.

Saints head coach Anthony Chevrier summed up the result of the game with one simple answer – the Saints were outplayed.

“They put together better AB’s than us, scored more runs than us and pitched a little bit better than us, and that’s why they won 7-4,” Chevrier said.

However, Chevrier also expressed that there needs to be more consistency within the team’s pitchers in order for the entire team to have success.

“It all starts on the mound. You got to have a guy that can control at least two or three pitches,” Chevrier said. “We were kind of put in a situation where we had to go after guys in plus counts.”

Dellan Raish (Arizona State University) began the day on the mound for the Saints, where he would accumulate six strikeouts over four and half innings. However, Raish also allowed eight hits and five runs against the Legends.

After a scoreless first inning, the Legends would rack up four runs in the second. From early on in the game, the Saints were playing catch-up.
Chevrier explained that when the team falls behind due to inconsistency on the mound and defensive mistakes, the offense is put under more pressure than it should be to perform and keep the team in the game.

“At the moment, we are not getting that consistency on the mound, so we will continue to search, continue to give guys opportunities, continue to work with them and help them get better so that we can put the pieces of the puzzle together,” Chevrier said.

After this however, there would be a shift in momentum and the Saints would be held scoreless in the next five innings, not reaching base again until the ninth.

“We definitely beat ourselves,” Chavez said. “When we come out flat like that, then it’s hard to come back in, especially if they start scoring and gain momentum.”

In regards to the Saints pitching situation, Magee expressed how the entire team is obligated to helping each other and picking their teammates up.

“When the season first started, our pitching was picking us up as hitters, and now it’s time to pick them up when they struggle,” Magee said. “It’s our time to flip the script and do what we got to do in order to put some runs on the board for them.”

As for the team, both Chavez and Magee are not concerned at all. They trust that this experience is all part of the process and part of the game.

“We’re always going to face those little bumps in the road. We just need to get around it, keep winning and doing our thing. As long as we play baseball the way we play it, then we should be totally fine,” Chavez said.

This is an aspect of the game that players such as Magee appreciate the most, as these types of games serve as an opportunity to see what the team is made of in the coming days.

“That’s the beauty with baseball – you get to play every day or about five to six times a week – it’s not like football where you play once a week and feel that loss for six or seven days,” Magee said. “It’s easy to play and have fun when you’re winning, but you find out exactly what you’re made of when you get beat, and find a way to respond back the next day.”

The Saints will have the opportunity to do just that as they will face off against the Legends again tomorrow at 6:05 p.m. at Jackie Robinson Memorial Field in Pasadena.