Saints Game Ends in a Bizarre Delay Against Legends 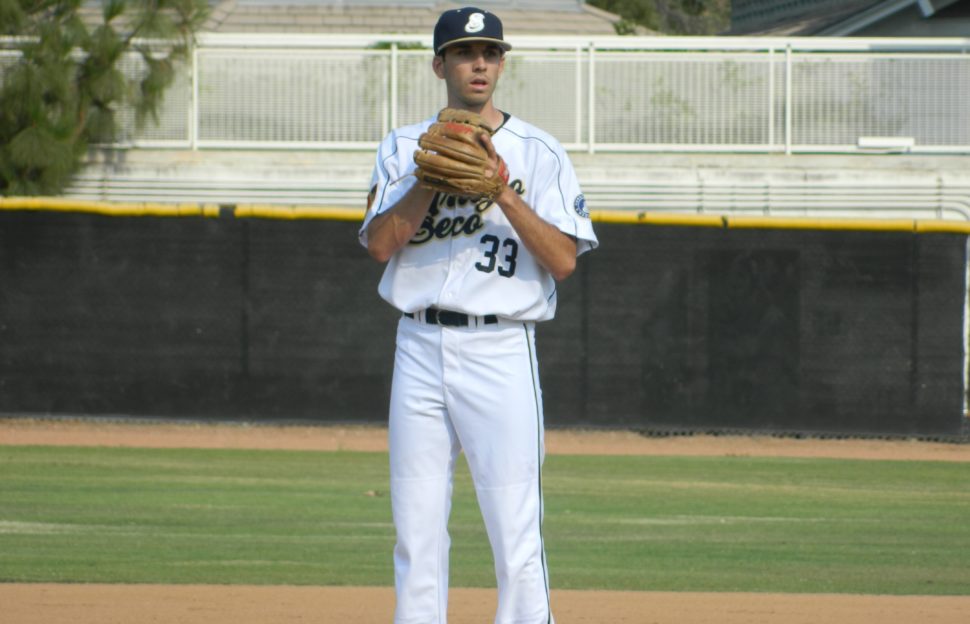 The Arroyo Seco Saints relied on starting pitching and defense in order compete with the Long Beach Legends in Thursday’s matchup. Jumpei Akanuma (Lee University) pitched a solid five innings giving up six hits and two runs. This allowed the Saints to rely on their defense to keep them in the game.

The Legends would respond in the bottom of the 2nd inning when Sahagian would hit a triple and be brought in by Jake Scott’s double. The score would be 2-1 heading into the third inning.

Akanuma would pitch a phenomenal game, holding the Legends to one hit until the 5th inning. The Legends would eventually tie the game after a single, a couple of walks, and a fielders choice.

The game would remain a tight defensive game as well as a pitching duel. It would stay tied that would force extra innings.

“The elements are really tough here, there’s an ocean breeze that blows in from right and center field so it eliminates pretty much half of the field in the air,” Coach Chevrier would discuss the importance of defense.

In the 11th inning, the Saints were looking to rally and take the lead as the sunset over the field at Long Beach City College.

Durna would start things off with a lead off double. This would put some life in the Saints dugout. Durna would then move over to third on a groundout to the second baseman by Gibree. Brett Adams (Scottsdale Community College) would hit single to left field that would score Durna. The Saints would lead 3-2 heading to the bottom of the inning.

“I led off a lot more than I am used to, just get on anyway possible,” Durna would comment about his leadoff double.

“Whenever you get a leadoff double you want to capitalize on it,” Adams would comment on his RBI, “I guess I got enough of it to get it through, but it starts with Tyler getting on second to start off the inning.”

The Saints looked to close out the game, but the Legends weren’t going to go away quietly. The Legends would start things off with a single from Anderson. Eventually they would tie things up after Sahagian would bunt down the third baseline that Briggs would overthrow to first base.

With a runner on third, and no outs, the Saints would load the bases by intentionally walking the next two batters. In a do or die situation, the Saints would move Bryan Smith (Occidental College) in from center field to play right in front of second base. The Saints were looking for a ground ball to get the out at home plate and avoid a walk off from the Legends.

Everything was on the Saints side as Jake Scott would ground out to Briggs at third base and they would get the out at home. The next Legends batter, Gamble, would hit the ball directly up the middle. Smith would turn the ground out into an 8-3 double play to end the inning. This would give the Saints life heading into the 12th inning tied 3-3 now.

“It’s momentum for this team in general because it brings in a big moral boost,” Coach Chevrier would comment on the impact of the big double play Smith had to end the 11th inning.

The game was unfortunately called due to the lack of lighting tied 3-3 and would resume the next time these two teams meet.

“We start with the top of our lineup just like a regular game, so hopefully get a run early and put it away early,” Durna would say about his thoughts on when they resume the game.

This meeting will be held next Tuesday, June 27th at 5:00pm at Long Beach City College. This will be the second game that has been delayed due to lighting for the Saints this season.