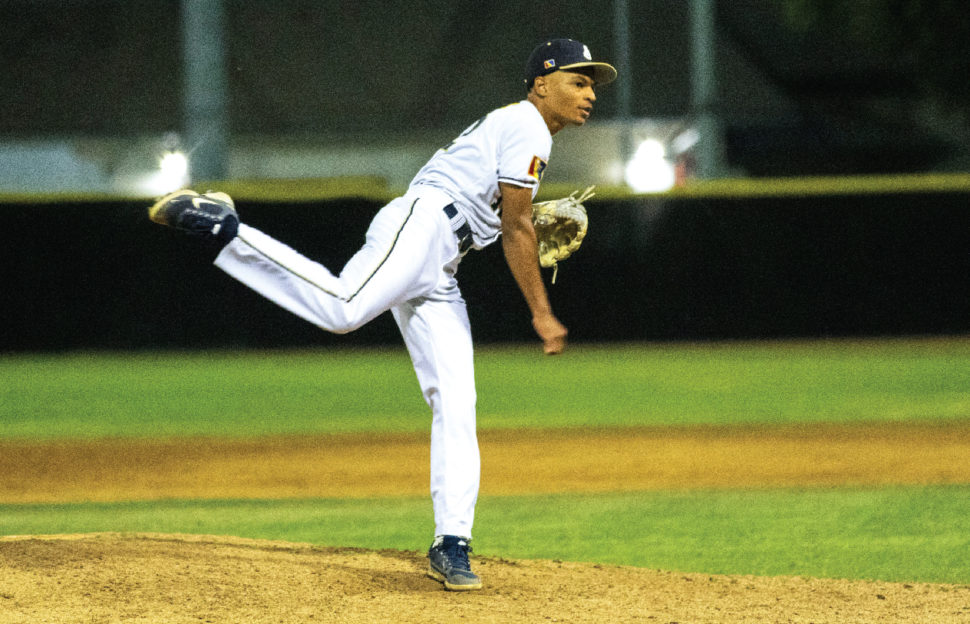 PASADENA, CA – The Arroyo Seco Saints had a Ruff night against the OC Riptide, and no, that’s not a typo. While the 10-2 loss was rough, as the team trailed 10-0 at one point, two-way pitcher Rashad Ruff (Coppin State) was one of the lone bright spots.

Ruff pitched two innings of perfect ball to end the game, striking out five of six batters to shut down the Riptide offense. Additionally, Ruff pinch hit at the top of the order and belted a single in his first at bat of the season to help kick start the offense.

“I was pretty excited. I’m a little bit new on the team, so everyone’s watching me when I pitch too. I sensed a little bit of life,” Ruff said.

The Saints scored their first run of the game immediately after Ruff’s single, but the large deficit proved too much to overcome.

Starting pitcher David Vizcaino (UC Irvine) walked the leadoff batter to open the game, but settled in to retire the next three. The Saints followed suit, as the only offense they could drum up in the bottom of the first was a leadoff single from designated hitter Connor Bradshaw (Pepperdine).

Vizcaino struck out two in the second to keep the Riptide off the board, and the Saints threatened with two base runners, but were left stranded to keep things scoreless.

The Riptide opened the scoring up off two separate RBI singles and had the bases loaded, but Vizcaino got out of the jam without allowing further damage. The righty recovered strongly in the fourth, requiring just 11 pitches to mow through the OC lineup. He finished the night with five hits allowed, two earned runs and three strikeouts.

OC kept the Saints at bay through four innings, but reliever Fino Amador (Cal State Los Angeles) entered to keep the Saints within reach. Amador struck out one en route to a scoreless fifth.

Shortstop Brandon Bohning (Cal State Northridge) led off the fifth with an infield single to get the bats going again, but the Riptide clamped down defensively to keep the Saints off the board.

The Riptide doubled their lead by putting two runners on to start the sixth and capitalizing on an error in the Saints’ outfield to score both. The next batter singled to bring home a fifth, and a two-run shot from OC’s Terrence Simmons put the Riptide up 7-0.

Derek Yoo (Columbia) entered the game and struck out his first batter, and a grounder ended a long sixth inning.

The Riptide added three more in the seventh to reach double-digits, but Ruff entered and struck out two in a 1-2-3 eighth inning.

“When we’re down by a lot, usually it’s been a long game,” Ruff said. “I just try to go in there and get quick outs, get ahead of the batters, and maybe get some easy popups and groundballs.”

Ruff wasn’t done contributing yet. After a single from second baseman Jackson Cobb (Crowder), Ruff came in to pinch hit for Bradshaw and sent a single to left field.

First baseman Jake McMurray (Oral Roberts) broke up the shut out with a single to center to make the score 10-1 entering the ninth.

Ruff continued to dominate once back on the mound, striking out all three batters he faced in the ninth to finally put the Riptide offense to rest.

Two pinch hitters got to work in the ninth to add another run: Bo Willis (Northwestern State) reached second off a misplayed single, and newcomer Jake Cruce (San Diego State) tallied his first RBI with a single to give make the score 10-2.