Saints Fall Short in 13-6 Loss to the Catch 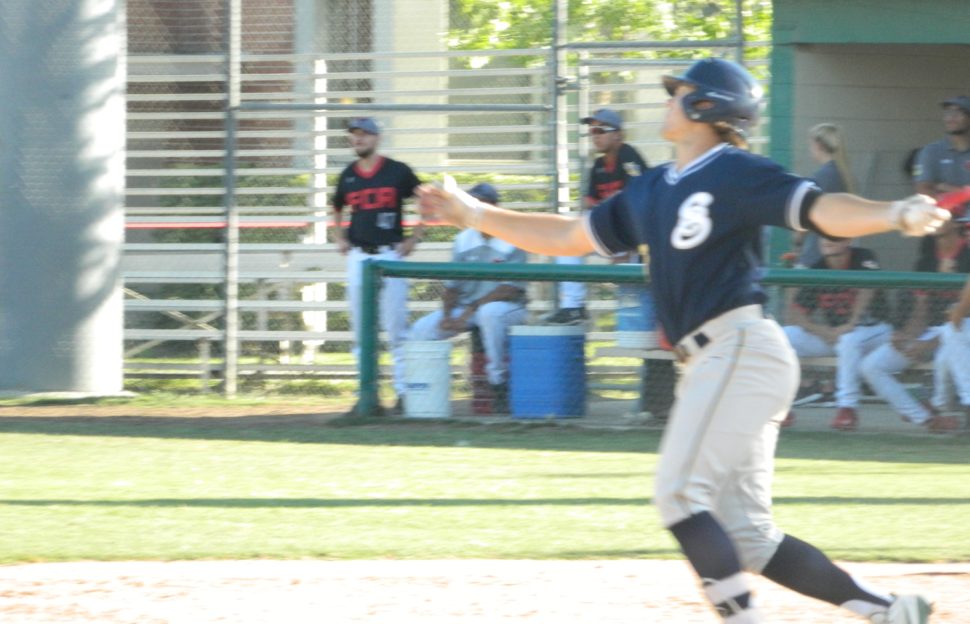 The Arroyo Seco Saints couldn’t quite overcome the offense of the SoCal Catch. In a 13-6 loss, the Saints offense fell off after the past few games.

The Saints struck first in the game in the top of the 1st inning. After Brennan McKenzie (Cal Poly Pomona) reached on an error, Blake Burton (University of Washington) would double to left center field to score McKenzie. The Saints would head into the bottom of the first with a 1-0 lead.

“Going up there, relaxing, and having fun. Just seeing the ball and hitting it,” Blake Burton would comment on his success at the plate.

Conor Cuse would be the starting pitcher for the Saints.

The Catch would respond quickly to the Saints early lead with 4-runs in the bottom of the first inning. After Grant Robbins would lead off with a walk for the Catch and steal 2nd base. Shay Whitcomb would double to score Robbins. Steven Garrett would single to put runners on the corners. Evan Sandmann would hit a sac fly to score Whitcomb. The Catch would lead 2-1. After an error by Alex Briggs and an error by McKenzie, two more runs would score for the Catch. The Catch would take a 4-1 lead into the second inning.

The Saints would respond in the third by tying the game at 4. Gabe Chavez (CSU San Bernardino) led off with a walk for the Saints, Tyler Durna (UC San Diego) hit a double off the right field wall to score Chavez. Burton would hit a triple down the right field wall to score Durna. Daren Teson would score on a single by Alex Briggs (LIU Brooklyn) to tie the game at four heading to the bottom of the third inning.

“Just being relaxed and having fun with it. It’s helping, I’m seeing the ball a lot better and putting a swing on it,” Briggs would comment on his hitting as of late.

The Catch would add on four more runs in the bottom of the third inning and lead 8-4. The Saints wouldn’t be able to recover from there.

The Saints would stay quiet until the sixth inning, while the Catch would add on two more runs in the 5th for a 10-4 lead, when Corbin Lamb (Lee University) would come into pitch.

“I was just trying to work the other way and he just pitched at my approach, sometimes when you catch it at the right time it goes,” Josh Magee would comment on his home run.

The Saints offense would be capped at 6. The Catch would add on three more runs in the seventh inning for insurance. The Saints would fall 13-6 to the Catch.

“We just tried to come out and stay hot like we have been, but sometimes things just don’t go your way in this game and today was one of those days,” Alex Briggs would say about the loss.

“Baseball you have ups and downs, and it’s all about consistency, we just didn’t have it today, but we will get back at it tomorrow,” Blake Burton would comment.

“It’s all about being consistent, sometimes it just doesn’t go your way. You compete on all sides of the ball and you just get beat and that happened today,” Magee would say about the Saint’s loss.

The Saints look to bounce back when they travel to San Luis Obispo on July 21st to face off against the Blues. First pitch is scheduled for 6:00pm.

Prior to today’s matchup, the Saints and Catch completed the delayed game that was 13-5 Saints heading to the ninth inning. The game would be over rather quickly and the Saints would win 13-5 in the end.