Saints In Contention Throughout, Yield 3-2 Loss To Orange County 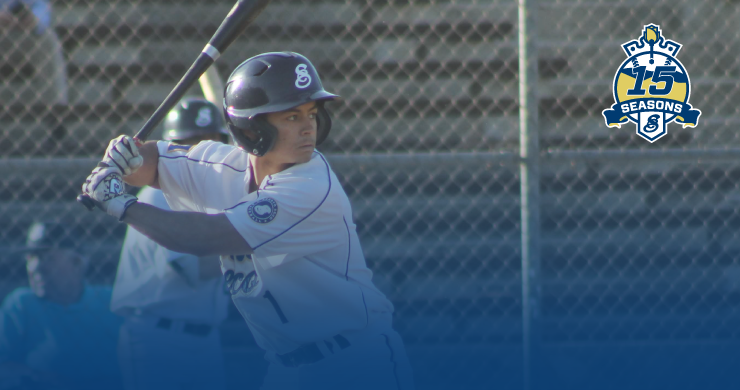 PASADENA, CA – For the second game in a row, the Arroyo Seco pitching staff came ready to play. A day after holding the Barons to just two runs, the Arroyo Seco staff limited the Riptide to three runs, two of which were unearned, but the offense could not muster enough firepower to snap the Saints out of the current six game losing streak.

With Arroyo Seco holding on to a slim 2-1 lead, the Riptide tied the game in the sixth inning on a Saints error and had the bases loaded, but reliever Jesse Reed coaxed the inning-ending popup to leave the bases loaded to keep the game tied. Orange County would keep the pressure on, taking a 3-2 lead in the next inning on a pair of two out hits.

After the Saints took a quick 2-0 lead after the first inning, Orange County countered with a run the very next inning to cut the Saint’s lead in half. However, Saints starter Colin King dazzled over the course of his outing. King stranded Riptide runners over the next three innings to help the lead temporarily stand up and pitched efficiently, finishing with five innings while holding Orange County to a single, unearned run.

“I had command of the fastball early on in counts, secondary pitches were working well,” King said when asked about his dominant performance. “The main focus was throwing the first pitch strike, getting ahead in counts, and keeping them [Riptide batters] uncomfortable.”

The Saints started the game on fire, with three of the first four batters reaching base. After Gabe Chavez walked and Drew Cowley singled, the Saints capitalized and emptied the bases with Cooper Williams lacing a one-out RBI double into the right field gap to give Arroyo Seco an early 2-0 lead. However, the Saints would not score again, and the Riptide would tack on single runs in the second, sixth, and seventh innings to overcome the early deficit.

“As we see their swing and how they are approaching the game, we adjust our approach also. We stay on the offensive and aggressive side.”

“I was trying to attack fastball early, maybe even first pitch because it can be the only one you get. I kept that plan throughout every at bat.”

“Our pitching the past couple of games has been really good, I think our hitters just need to be more aggressive earlier in counts and we’ll start getting some more wins.

The Saints travel to Thousand Oaks on Wednesday to take on the Conejo Oaks in a California Collegiate League game at 4:30 pm before returning home to Brookside Park on Thursday to play the Ventura County Pirates at 6:05 pm.